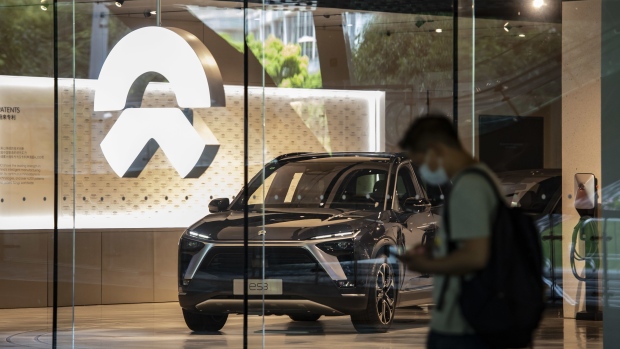 A NIO Inc. dealership in Shanghai, China, on Wednesday, June 8, 2022. The US-listed, Chinese electric vehicle-manufacturer NIO Inc., which already reported May deliveries in line with its guidance, is expected to post first-quarter sales that reach management targets as well. Photographer: Qilai Shen/Bloomberg , Bloomberg

Short-seller Grizzly Research released a report alleging Nio had used battery sales to a related party to inflate revenue and boost margins, concluding that the company is being propped up by “financial shenanigans” and is littered with corporate governance red flags.

“The report is without merit and contains numerous errors, unsupported speculations and misleading conclusions,” Shanghai-based Nio said in a statement Wednesday. The board is reviewing the allegations and considering the appropriate course of action to protect shareholders’ interests, the EV company added.

Nio shares fell as much as 11.6% in Hong Kong on Wednesday, the biggest intraday decline since May 10, trimming their gain this year to 4.2%. Its US-traded shares slipped 2.6% Tuesday but are up almost 30% this month.

Grizzly Research didn’t immediately respond to a phone call and email outside regular US business hours.

Among other notable targets, Grizzly Research questioned the results of Chinese online education company GSX Techedu Inc., one of the stocks at the center of the collapse of Bill Hwang’s Archegos Capital Management, calling it the “worst publicly-traded education company.”

The short-seller has also issued negative reports on other China-linked companies, including ReneSola Ltd. and autonomous driving technology developer TuSimple Holdings Inc., which it claimed was an “empty box that was nicely packaged and irresponsibly dumped on US investors.” The stock has plunged 80% since the report was released in August last year.

(Adds other targets of Grizzly Research.)