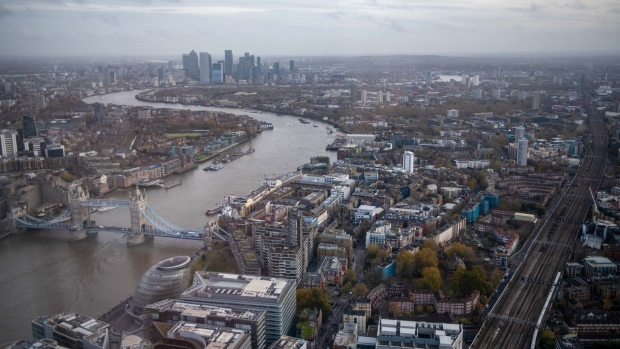 The Canary Wharf business, financial and shopping on the bank of the River Thames beyond Tower Bridge in London, UK, on Saturday, Nov. 26, 2022. A survey of finance workers has found that some employees are ignoring return-to-work mandates, the latest sign of the challenges firms face in encouraging staff back to the office. , Bloomberg

A new development in the UK government's efforts to deregulate the City of London may be the relaxation of bank ring-fencing, according to a person familiar with Treasury plans. Advocates of Brexit consider ring-fencing the sort of unnecessary regulation that can be swept aside to encourage economic growth. But it's still unclear how drastic any changes to the rules might be.

As editor Katherine Griffiths puts it, the move could be “a small whimper that they're packaging as a big bang.” It would be a game-changer for banks, Griffiths says, if the government removed all ring-fencing rules. But the official government announcement is likely to be less drastic.

City minister Andrew Griffith is set to deliver a wider-range of reforms ahead of Christmas. Depending on what regulations (and to what extent) the government chooses to scale back, optimists say this could be an inflection point for the City. Perhaps one as momentous as the original financial “Big Bang,” the wave of deregulation in 1986 that turned the City of London into a global finance hub.

The new Lord Mayor of London, Nicholas Lyons, could be considered one of those optimists. In his conversation with Francine Lacqua, he says the competition presented by continental rivals like Paris and Amsterdam is a good wake-up call, but that London is always going to be “the most powerful, most relevant global financial center in its time zone.”

“We now have in No. 10 and No. 11 two people who really understand not just business but financial services,” Lyons says. “And that's very important, because we cannot have a thriving national economy without an immensely strong City of London.”