National Bank of Canada Chief Executive Officer Louis Vachon is stepping down after 14 years and will be succeeded by Laurent Ferreira atop the country’s sixth-largest bank.

Ferreira, 50, who was promoted to chief operating officer in February, will take over as CEO on Nov. 1, the Montreal-based lender said in a statement Wednesday.

Since taking the reins in 2007, Vachon, 59, helped National Bank grow beyond its stronghold in Quebec by building up its capital-markets unit and diversifying offerings within its divisions, providing the company with a steadier stream of earnings.

“Since Louis took over, every division of the bank has thrived, driving superior operating performance, including the highest ROE among the Canadian banks, and one of the highest ROEs in global banking,” said Rob Wessel, managing partner of Hamilton ETFs and a former bank analyst at National Bank. “Not surprisingly, this resulted in significant share-price out-performance over his tenure.”

National Bank shares had the best performance among Canada’s eight largest publicly-traded banks during Vachon’s leadership, rising more than 200 per cent. Vachon is the only CEO of one of those banks who’s been in the top job since before the financial crisis.

National Bank’s return on common shareholders’ equity was 22 per cent in the fiscal second quarter.

“Mr. Vachon has driven financial, technological and cultural progress, helping position the bank for long-term success,” Scott Chan, an analyst at Canaccord Genuity Group Inc., said in a note to clients. “Under his leadership, the bank has delivered an industry-leading compound annual total shareholder return of 13 per cent.” 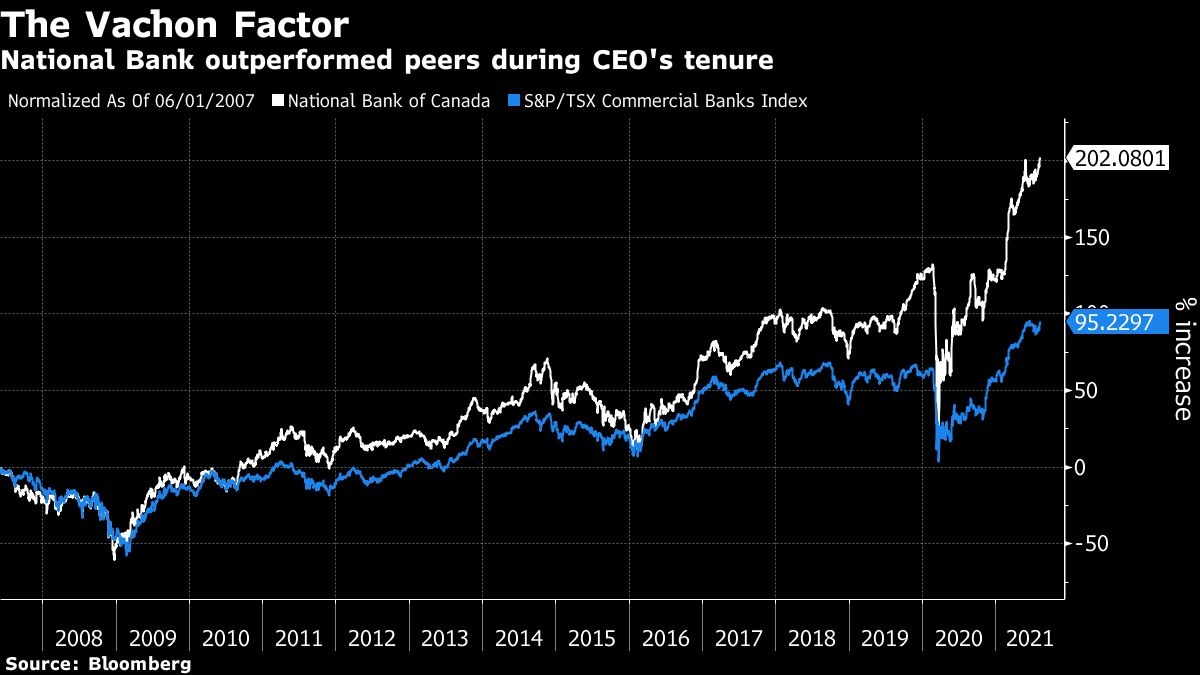 Ferreira has been with National Bank for more than two decades and held a variety of roles in the financial-markets division, including co-head. Starting in 2019, he co-managed the bank’s digital overhaul and cultural transformation. Ferreira was previously a managing director for equities and derivatives.

“Over the course of his career, Laurent has demonstrated a decisive and unifying leadership approach, always quick to identify and seize growth opportunities,” Vachon said in a statement. “He has been central to the bank’s transformation and cultural shift, and he has played a key role in the success of our financial markets franchise.”

With Vachon’s departure, Bank of Nova Scotia’s Brian Porter will now be the longest-serving CEO of a Big Six Canadian bank.

“Mr. Ferreira will be a suitable replacement as he has demonstrated a deep understanding of the banking industry, global capital markets, risk management and balance-sheet management,” Canaccord’s Chan said.