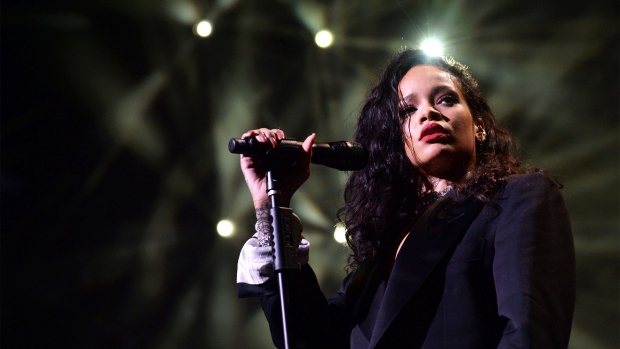 (Bloomberg) -- Broadcast Music Inc., which represents the rights of thousands of songwriters, including Ed Sheeran, Sam Smith and Rihanna, is no longer on the market.

A sale “is no longer an avenue we are considering,” the company said in a statement Friday, adding “we’ve been clear from the start that as we explored strategic opportunities for BMI, we were going to evaluate all options that would support our affiliates and grow the value of their music.”

BMI hired Goldman Sachs Group Inc. earlier this year to explore strategic options, including a sale. With revenue of more than $1.4 billion in 2021, executives thought it could sell for at least $1.5 billion. They asked some bidders for as much $2 billion or $3 billion, according to people familiar with the talks. The company is a powerhouse in the music business. Any time a bar, restaurant, radio station or streaming service wants to play Rihanna’s “Work” or Sheeran’s “Shape of You,” they must pay BMI.

The company is the latest in a series of major music entities that hasn’t convinced a buyer to pay what it wanted. Concord, one of the largest independent music companies in the world, ended its sale process after rejecting every offer as not big enough. Other companies that have explored a sale, including Round Hill Music, Anthem Entertainment Group and Tempo Music, have yet to find a buyer -- though they have not publicly ended the hunt.

These aborted sales signal a major shift in the market for music assets. The value of music copyrights has skyrocketed in recent years as new investors flooded into the market. Music has always appealed to finance types who want to go to awards shows and hang around pop stars. But these assets became even more intriguing in recent years as a proliferation of streaming services boosted industry revenues. Investors saw them as a stable alternative to the stock market.

Two of the three major music companies, Universal Music Group and Warner Music Group, went public, while many of the most famous musicians of the last century sold their catalogs in deals that collectively generated billions of dollars.

Yet that market has started to slow down this year due to rising interest rates and the shrinking supply of available assets. The influx of savvy investors like Blackstone Inc., KKR & Co. and Apollo Global Management Inc. has also led to more measured spending.

Market volatility “has thrown more of these processes into an uncertain state,” said Josh Gruss, the chief executive officer of Round Hill. Gruss he’s still mulling offers, however.

Many competitors and potential buyers never understood how BMI could sell itself. Owned by a consortium of radio and TV broadcasters, the company has long operated as a nonprofit. But it would need to start making money to justify the valuations it sought.

BMI sales have grown between 5% and 10% a year the last few years, save for a blip during the first year of the pandemic. That’s not enough to start generating material profits in a short time frame.

The company proposed to potential buyers that it would change how its payments to artists work, including the possibility of paying them less upfront in exchange for equity in the business. It also discussed ways to grow its share of the market for performing rights, in which it competes with ASCAP, as well as smaller players like Global Music Rights and SESAC. BMI discussed building or buying other companies to diversify its business.

The company also talked a lot about cost-cutting. One potential bidder had a plan to slash expenses and automate a lot of the royalty collections.

BMI received a few offers from interested parties, including private equity firms and technology providers, said the people, who asked not to be named discussing private deal negotiations. Yet, in the end, most of the potential buyers either elected to not pursue a deal or offered complicated offers that didn’t work for BMI.

This is the second time this year that Goldman Sachs advised a company it could have gotten a multibillion-dollar payday for and came up empty. Goldman also advised Concord, which owns the Rodgers & Hammerstein catalog, among other assets. The state of Michigan’s pension fund received offers of more than $4.5 billion for the business, but it only wanted to sell if it was blown away by an offer of closer to $6 billion. No such buyer materialized. A spokesperson for Goldman declined to comment.

That investment bank isn’t alone in striking out. Moelis & Co. was shopping Round Hill, Anthem and Tempo at the same time.

The slowdown in mergers and acquisitions has prompted many music companies to raise money by selling bonds. Hipgnosis Songs Management, one of the biggest buyers of copyrights in recent years, is raising more than $220 million using its existing catalog as collateral.

If there is one big-ticket sale that most people still expect to yield a result, it’s the Pink Floyd catalog. It’s one thing to pass on a collection of both desirable and undesirable assets. It’s another to pass on one of the great music catalogs of all time.