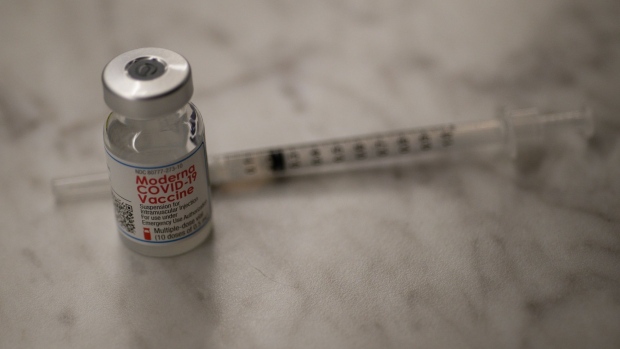 A dose of the Moderna Covid-19 vaccine at the CareNow Denver University urgent care center in Denver, Colorado, U.S., on Tuesday, Nov. 16, 2021. A group of metro public health agencies has urged Colorado Gov. Jared Polis to issue a statewide mask mandate and vaccine passports in indoor settings because of a surge in COVID-19 in the state's hospitals, reports the Denver Post. Photographer: Daniel Brenner/Bloomberg , Bloomberg

(Bloomberg) -- Moderna Inc. shares fell after the pharmaceutical company lost an appeal of a patent ruling involving a rival’s drug-delivery technology, which could make its Covid-19 vaccine vulnerable to infringement suits.

A three-judge panel of the U.S. Court of Appeals for the Federal Circuit on Wednesday affirmed decisions by the Patent Trial and Appeals Board on two Arbutus Biopharma Corp. patents. The court said Moderna had no standing to appeal the ruling on one patent because it hadn’t developed its Covid vaccine until after it filed the appeal -- the pandemic hadn’t yet begun. The panel also and affirmed the board’s finding that Moderna hadn’t proven the second patent covers an obvious invention.

Shares of Moderna dropped by as much as 8.1% in New York. Arbutus jumped 30%. Roviant Sciences Ltd., the largest holder in Arbutus with about a 29% stake, according to data compiled by Bloomberg, jumped by as much as 18%.

Moderna’s future is tied to the Covid vaccine. The company reported $60.2 million in revenue in 2019, a figure that jumped to $803.4 million last year, boosted by federal grants. The Cambridge, Massachusetts-based company has projected about $20 billion in sales this year, almost all of it from the Covid vaccine.

Representatives of Moderna and of Arbutus didn’t immediately respond to requests for comment.

Warminster, Pennsylvania-based Arbutus was “heavily favored” to win the appeals, which could lead to an infringement suit against Moderna, Jefferies analysts Kelechi Chikere and Michael Yee had said in a note to clients.

Royalties from nerve-function drug Onpattro -- the first Food and Drug Administration-approved medicine that used Arbutus’s technology -- form the only source of revenue for Arbutus, which reported just $6.9 million in licensing fees last year.

Investors have been speculating that the Arbutus patents, directed to a more stable lipid nanoparticle, will entitle the company to royalties from the mRNA-based vaccines by Moderna and Pfizer Inc. Moderna has a license to the Arbutus patents, but it’s limited to the areas of a respiratory virus known as RSV, Influenza A, and the mosquito-transmitted viruses Chikungunya and Zika.

Moderna preemptively challenged three Arbutus patents on the technology at the PTAB, with mixed results. The board invalidated one patent not at issue in the Federal Circuit’s latest two rulings, upheld all of another, and upheld some claims of a third.

Moderna appealed, challenging the board’s findings that it didn’t show parts of the patents were obvious and anticipated.