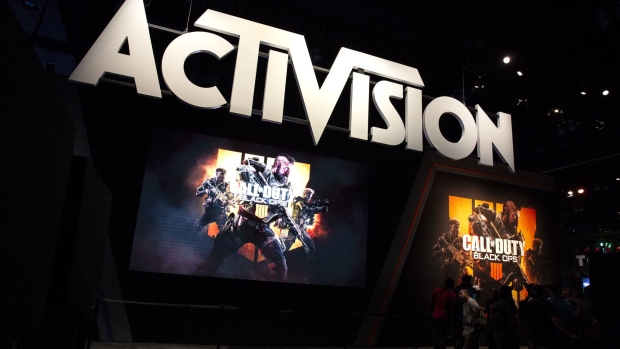 (Bloomberg) -- Less than three weeks into 2022, President Joe Biden’s antitrust regime is facing its first big test of the year. Microsoft Corp.’s $69 billion all-cash takeover of Activision Blizzard Inc. brings together two major gaming platforms in a deal that directly affects consumers -- and could also raise grievances among some of the tech giant’s biggest rivals.

With its $2.3 trillion market valuation, Microsoft hasn’t exactly flown under the radar in Washington. Still, it’s drawn less scrutiny than companies such as Google parent Alphabet Inc. or Meta Platforms Inc.’s Facebook, which are already in the crosshairs of antitrust enforcers at the Justice Department and the Federal Trade Commission.

It’s not yet clear whether the FTC or the Justice Department’s antitrust division, which share merger enforcement, would review the Microsoft-Activision transaction. What is clear is that the agreement is likely to get an extensive review, and that both organizations are ready to increase their scrutiny of deals in general: they announced Tuesday a combined effort to toughen merger evaluations, saying a new framework is needed to combat a surge in potentially anticompetitive transactions.

The primary antitrust review focus will likely be the combination of Activision’s gaming portfolio with Microsoft’s consoles and hardware systems, a tie-up that will “undoubtedly be closely scrutinized,” by regulators, Elevation’s Betty Chan wrote in a note Tuesday. Chan expects the deal to require approvals in the U.S., European Union and China.

Microsoft’s gaming business already includes the Xbox console and a roster of popular titles, including the Halo franchise and Minecraft virtual-world-building game. In its statement announcing the deal, Microsoft pitched itself as the No. 3 player in the global games market, behind Tencent Holdings Ltd. and Sony Group Corp. An executive order signed by Biden last year made it clear that addressing consolidation among industries was a top priority for the administration, while Lina Khan’s ascendancy to the top of the FTC has brought the idea of Big Tech breakups into the spotlight.

Microsoft has long attempted to set itself apart from the other big technology companies, touting its cooperation with small businesses and rival programs, while simultaneously criticizing its competitors and backing their detractors in major lawsuits.

Partly because of an image rehab after its own antitrust fight two decades ago, and partly because it lacks strong businesses in some of the areas most in the spotlight, such as social media and internet advertising, Microsoft has so far evaded the level of scrutiny given to Apple Inc., Amazon.com Inc., Google and Facebook.

The FTC, for example, has been looking to unwind Facebook’s acquisitions of Instagram and WhatsApp, arguing the deals were part of a strategy by Chief Executive Officer Mark Zuckerberg to eliminate companies he saw as competitive threats by buying them. The Justice Department, meanwhile, is scrutinizing Alphabet for Google’s digital ad market practices.

While those companies are still digesting the news of the Activision deal, several are privately wondering whether this could be the catalyst that finally pulls Microsoft into the antitrust fray that they’ve been dealing with for years, according to people familiar with their thinking.

The outcome of the government review will help clarify whether regulators plan to give Microsoft’s deal activity the level of scrutiny they give to the other big tech firms, New Street Research analysts wrote in a note. A Meta acquisition of Activision would almost certainly be challenged, they said.

“If the government does not challenge the Activision deal, it reveals a competitive disadvantage for Meta relative to Microsoft,” New Street said. “Under that set of government rules, Microsoft can compete in virtual reality via acquisitions, while Meta’s acquisitions in this area will face more scrutiny.”

Gaming, an already-mainstream activity that has grown in popularity during the pandemic, is an industry that regulators -- or politicians eager to grab headlines -- might be keen to make a talking point since it’s part of so many Americans’ daily lives.

Adding Activision titles such as Call of Duty and World of Warcraft would help Microsoft expand offerings for the Xbox, and push it into the fast-growing markets for mobile gaming and the metaverse. Though the concept of what the metaverse is comprised of hasn’t yet been fully established, the companies are likely to argue to regulators that a deal will help them stay competitive in this evolving tech ecosystem, according to a person familiar with the matter, who asked not to be identified discussing private information.

Regulators are likely to look closely at how Microsoft’s ownership of Activision could harm its rivals by limiting their access to the company’s biggest games. The latest of the Call of Duty franchise -- Call of Duty: Vanguard -- was the top-selling video game last year, according to data from The NPD Group. Game makers like Electronic Arts Inc., which makes the Battlefield titles and the EA Sports franchise, could also be worried that Activision’s games would be given preference over theirs on the Xbox platform.

Still, Bloomberg Intelligence’s Jennifer Rie thinks an objection on those grounds would have little chance of success.

“The FTC or DOJ would have to show that, post-merger, Microsoft would have both the incentive and the ability to foreclose rivals by virtue of owning the Activision assets,” said Rie. “We believe an argument for either one would not be successful in court.”