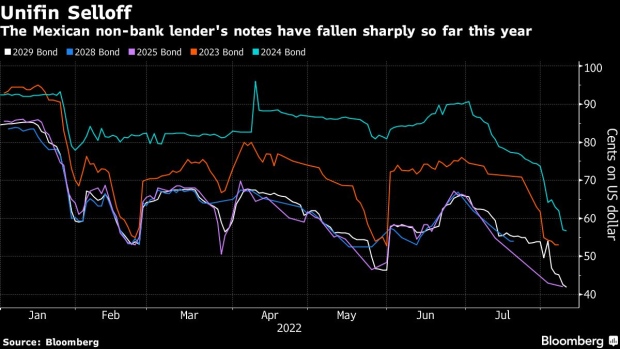 (Bloomberg) -- Mexico’s biggest non-bank lender, Unifin Financiera SAB, said it was halting bond payments and will restructure its debt, sending bonds and shares spiraling to all-time lows as investors absorb the latest blow to the sector.

Unifin’s dollar bonds due in 2029 fell sharply to trade at about 10 cents from above 40 cents on Monday, according to pricing data compiled by Bloomberg. Shares in Mexico dropped a whopping 89%.

The collapse comes after the company said in a filing with the Mexican stock exchange late on Monday it wouldn’t make any further coupon and principal payments on its debt as it negotiates “a strategic restructuring” with its creditors. S&P Global Ratings downgraded the company to D from B+ after the announcement, saying the firm’s action results in a “general default.”

The decision by Unifin comes as only somewhat of a shock to investors, who witnessed two other collapses by Mexican non-bank lenders -- Alpha Holding SA and Credito Real SAB -- within the past year. Still, money managers and analysts had been reassured by Unifin’s top leadership late last month that the company would seek alternative funding sources.

“This doesn’t make sense unless the company’s liquidity and funding situation were much worse than management made it out to be,” said Omar Zeolla, an analyst at Oppenheimer & Co Inc. A better approach would be to “present the situation as it really is and begin to work with creditors for a solution. Now I expect any confidence in the company’s management to be gone.”

An external representative for the company said in response to questions from Bloomberg News that “the additional sources of financing were canceled because the environment deteriorated due to adverse news in the sector.”

Money managers are now scratching their heads over recovery values for the company’s debt, an exercise that’s been all-but-useless in the aftermath of Credito Real and Alpha’s crashes. Bonds from both of Unifin’s sectoral peers are quoted at pennies on the dollar.

“It’s very hard to come up with a recovery value,” said Edgar Cruz, a strategist at BBVA in Mexico City. “It’s like if a company of metal products were left without the machines to mold the metals.”

Unifin secured a $500 million credit line denominated in pesos with Credit Suisse and finalized an agreement with bondholders to extend the maturity of its $200 million 2022 bond to May 2024 in June. Fitch Ratings and S&P affirmed the company’s scores in June three and four notches below investment-grade, respectively, while assigning a negative outlook.

The company reported 14% portfolio growth in the second quarter compared to the previous year -- a much lower rate than others in the sector, according to Oppenheimer’s Zeolla. Unifin said at the time that it planned to issue a long-term bond for 4 billion pesos ($197 million) in the third quarter, guaranteed by government banks. The lender was also looking into the potential sale of repossessed assets, Zeolla said.

Financial institutions began to demand the liquidation of some revolving lines and the condition that the local note issue be ready by the end of the month and the funds be used to pay those liabilities, the representative for Unifin said. “The company was left in a very complicated position in the future as it was exchanging debt for debt.”