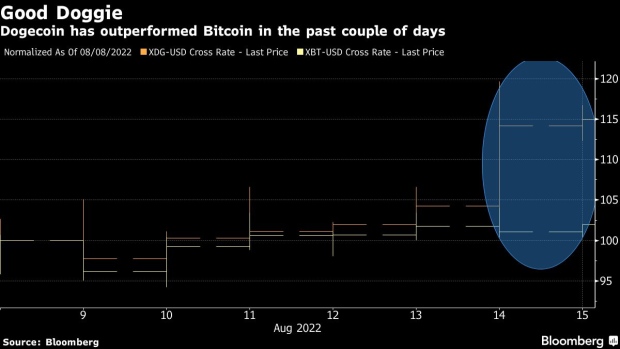 (Bloomberg) -- Dog-themed cryptocurrencies jumped on Monday amid broader retail-investor enthusiasm in the market, particularly as Ethereum works toward its much-anticipated software upgrade.

Dogecoin is up about 14% over the past five days, while Shiba Inu has gained almost 40%, according to pricing data compiled by Bloomberg. The meme tokens are holding their gains even as Bitcoin sits around $25,000 and Ether hovers at about $2,000 amid optimism around its upgrade, known as Merge, now expected around Sept. 15.

“Dogecoin and Shiba Inu have both broken out over the weekend, clear evidence that the retail investor is back,” said Hayden Hughes, chief executive of social-trading platform Alpha Impact in a message Monday, noting that there is optimism both coins will gain like Ethereum as they’re each due for upgrades as well.

The crypto market has shown some signs of recovery with its total market cap at around $1.2 trillion now, after having dropped to around $875 billion as of June 19, according to data from CoinGecko.

Lower-than-expected inflation prints out of the US last week boosted hopes that the Federal Reserve might be able to ease off its pace of rate hikes, helping riskier assets like crypto. Ethereum has also been supported after a final test stage before the Merge upgrade which co-founder Vitalik Buterin estimates will occur around Sept. 15.

Still, not everyone is all-in on the memecoin trend just yet.

“These coins don’t have the depth of market at times like Ether or Bitcoin, so when a bit of demand comes through, they hit a liquidity pocket and fly up, drawing in more speculators,” said Cici Lu, chief executive officer at consulting firm Venn Link Partners, in a message Monday.

Alpha Impact’s Hughes offered a note of caution about the rally as well.

“Alpha Impact traders have been on the sidelines, waiting to see if this trend is picked up by institutional investors who tend to trade during the week,” Hughes said.