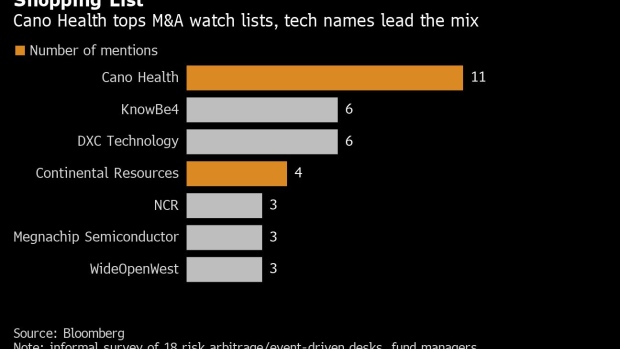 (Bloomberg) -- US mergers and acquisitions are poised to slide for the sixth straight quarter, to depths last seen at the onset of the pandemic, as a darkening outlook for deal-financing complicates an already bruising backdrop for the industry.

Elon Musk’s proposal to buy Twitter Inc. for the original offer price gave the M&A market a jolt this week, but the deal also served to highlight the funding concerns plaguing the business now. A slowing economy and market volatility are dimming hopes for a significant rebound in new transactions in the fourth quarter, particularly for the large leveraged buyouts that fueled last year’s historic M&A boom, according to a Bloomberg News survey of 18 event-driven/risk-arbitrage trading desks.

Deal flow may be limited given that Wall Street banks are nursing huge losses on buyout debt they can’t offload as rising interest rates and recession angst sap demand for risky assets. Cano Health Inc. topped the poll as the most likely takeover candidate in the next few months amid consolidation in health care.

“LBOs will be few and far between given the difficulty of obtaining committed financing from banks,” said Julian Klymochko, chief executive officer of Accelerate Financial Technologies, which runs a fund that uses a merger-arbitrage investment strategy. The market will see some strategic deals, “but those will be tough” as buyers and sellers may fail to agree on a price after the equities rout eroded valuations.

Roughly $212 billion worth of deals were announced in the past three months, the lightest period since the second quarter of 2020, data compiled by Bloomberg show. Several transactions that investors were betting on didn’t come to fruition, including Seagen Inc., for which deal talks stalled over price; and NCR Corp., which failed to find a buyer, blaming “the state of current financing markets.”

With stock and bond markets slumping as aggressive Federal Reserve policy tightening sparks concern over a potential recession, roughly $970 billion of US deals have been recorded this year, down 31% from the 2021 pace.

The pullback is causing pain for banks as they face the reality of selling bonds and loans to investors at a steep discount, with billions more still on their books for deals such as the buyout of Citrix Systems Inc. The revival of the Twitter LBO may add to banks’ pain if the terms of the original debt financing remain the same. It may leave bankers stuck with risky Twitter buyout debt and potentially facing big losses. Meanwhile, investment firms including Apollo Global Management Inc. abandoned talks to fund the transaction months ago. Talks between Twitter and Musk are stuck in part over Musk’s statement that his offer is now contingent on receiving $13 billion in debt financing.

For now, the financing headwinds are proving more powerful than the private equity industry’s interest in putting cash to work, survey respondents said. The risk is that spurs price cuts in deals that are in the works.

Survey respondents are increasingly wary of such scenarios in pending situations such as Apollo Global’s buyout of Tenneco Inc., the survey found. The auto-parts maker’s shares dropped to the lowest intraday level in about three months this week, blowing out the spread between its trading price and the offer level toward the wider end of current pending US transactions.

To be sure, there’s less of a threat of price reductions for newly signed transactions than those agreed on early this year.

“Deals that were announced since this summer have already factored in the market move down in valuations,” said Neetu Jhamb, a portfolio manager at Versor Investments who focuses on event-driven strategies.

Meanwhile, she said antitrust sentiment got a boost after UnitedHealth Group Inc. won court approval last month for its acquisition of Change Healthcare Inc., defeating a Justice Department lawsuit that sought to block the deal.

Still, the tech sector is seen as a possible growth area with total deal value up 39% year over year, Bloomberg data show. That’s thanks to a string of mega deals including the acquisitions of Activision Blizzard Inc. and Figma Inc.

Survey respondents expect that industry to keep pulling ahead in the fourth quarter, with more strategic buyers potentially stepping up.

Technology targets KnowBe4 Inc. and DXC Technology Co. placed highly on watchlists. Baring Private Equity Asia Ltd. has made a takeover approach to DXC and talks are ongoing, though they may not lead to an agreement, Bloomberg reported this week.

(Adds details on Twitter debt financing in the seventh pargraph)