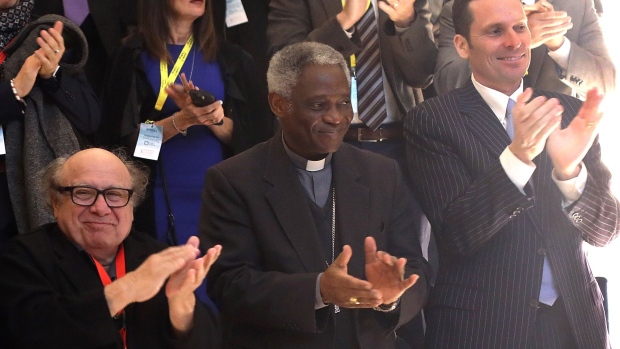 Addressing the packed auditorium of Rome’s Pontifical Urban University in an untucked navy shirt, the actor delivered a bumbling introduction from a sheet before handing the microphone to Cardinal Peter Turkson, a leading figure in the Catholic Church and once a possible contender to be Pope.

Towering over DeVito in the front row of the Aula Magna was a smiling Eric Harr. A well-connected Silicon Valley entrepreneur, Harr had organized the gathering near the Vatican on Dec. 4, 2017, to celebrate the work of a little-known but innovative impact investment firm called Laudato Si Challenge.

Set up about a year earlier, Laudato Si -- Italian for ‘praise be to you’ -- promised to join celebrities and investment firms with religious and academic institutions to tackle some of the world’s most pressing issues, from climate change and poverty to refugee crises, all under the spiritual guidance of the Vatican.

The fund’s messianic message was perfectly in sync with the nascent trend for purposeful investments that’s since ballooned into the environmental, social, and governance industry. Among Laudato Si’s first supporters were Chade-Meng Tan, an early Google employee whose job title was “Jolly Good Fellow”; Reem Al-Hashimi, a rising female political star in the United Arab Emirates; and the Catholic Church.

In the ensuing years, the Laudato Si fund hasn’t garnered much praise. A lawsuit filed in Marin County, California by British Virgin Islands-incorporated Crescent Technologies Ltd., an investor in the fund, alleges that Harr and Laudato Si’s co-founder Ahmad Ashkar mismanaged investor money and spent cash meant for investments in purpose-driven startups on their own salaries and advisory fees. Harr has denied those allegations and counter-sued, seeking damages for emotional distress, a separate lawsuit also filed in California shows.

Former employees also raised concerns in a 2018 letter written to Cardinal Turkson over how investor funds were used, including a large payment made to gain access to the Vatican. Turkson declined to comment.

And the startups that Laudato Si pitched to investors as helping to save the planet have struggled. Almost all of them have now wound down, and none of the fund’s investments raised significant capital, people familiar with the matter said. Even for risky early-stage investing, the low success rate of the investments made is striking given a venture-capital market that has been one of the frothiest in history. There is one asset left -- renewable energy firm Mandulis Energy -- which has a chance of making money, Harr said.

In an interview, Harr said the situation was “messy,” adding he wishes he had done some things differently. But he disagrees with the lawsuit, disputes the allegations of mismanagement and denies wrongdoing. Harr said he continues to work for free on the project and did everything with the best intentions.

“It has been a very difficult and painful experience,” Harr said by email. “But, I suppose like Ironman: these are the experiences that shape us and forge us into better, stronger people,” he said, referring to the ultra-endurance triathlon competition.

Ashkar didn’t respond to multiple requests for comment. A representative for DeVito confirmed the actor’s attendance but said he didn’t receive a speaking fee for his appearance in Rome.

Harr still runs a charitable foundation under the Laudato Si brand, supporting a water project in Senegal and cleaning canals in Sri Lanka, which have been more successful.

Laudato Si’s tribulations highlight the potential difficulties of trying to serve both profit-focused and charity-minded interests.

For his part, Harr’s path from Silicon Valley to the inner sanctum of the Vatican was an improbable one. After stints as a journalist and competitive triathlete, it was Harr’s daughter, Vivienne, who would vault him into the public eye. While still in elementary school, Vivienne set up a stall near her home in Fairfax, California, that sold lemonade and donated its profits to tackling child slavery, according to her website.

The venture gained public attention, helping her build a large social media following. In 2013, when Twitter went public on the New York Stock Exchange, Vivienne Harr rang the bell, standing next to Patrick Stewart of Star Trek fame. Realizing the potential, her father quit his digital marketing job and raised about $1 million in financing to take the lemonade business nationwide.

The venture, called Make A Stand, fizzled out, but it propelled Harr into the orbit of deep-pocketed investors, including Twitter co-founders Jack Dorsey and Biz Stone.

By 2015, Harr had moved on to his next gig with a feel-good factor: a mobile app that allowed people to support issues close to their hearts. The company, called Stand Technologies, received backing from some of Silicon Valley’s biggest names, including Twitter’s Dorsey as well as Greylock Capital. Stone predicted it would become “one of the most important apps we’ve seen in a long time,” and joined as chairman.

Once again, the idea failed to take off. But Harr had by now found his entrepreneurial north star: purposeful investment. Then a chance meeting with another like-minded entrepreneur in 2015 led him to move on to greater, which is to say, spiritual endeavors, according to Harr.

In 2010, Ashkar had founded the Hult Prize, an organization that challenged students to embrace social entrepreneurship and rewarded the best ideas with cash. The initiative won the backing of luminaries including former US President Bill Clinton and the participation of academic institutions like Harvard University.

Following their initial encounter, Harr said he and Ashkar decided to raise a fund inspired by the 2015 encyclical letter of Pope Francis, called Laudato Si, that stated combating climate change and protecting the environment as religious duties.

Since neither Harr nor Ashkar had much experience investing money or running a fund, they enlisted venture capitalist Stephen Forte for help, Harr said. From that, the Laudato Si Challenge was born.

The group planned to raise $5 million from investors which would then be redeployed in startups across the energy, food, water and conservation sectors, among others, according to a marketing document sent to investors.

The chosen companies would then participate in an in-person accelerator in Rome, including advice on “ethics and missions” from Cardinal Turkson, whose signature appears on the marketing document.

Investors gave the firm money to deploy into startups and to cover its own expenses for a decade. But all the latter funds were used within a little over 12 months. Harr said the firm paid a fixer $120,000 to help navigate the complex bureaucracy of the Vatican. More than $10,000 was used to pay a Laudato Si employee who made harassment allegations against the Vatican fixer, Harr said.

The allegedly profligate spending peaked at the meeting attended by DeVito in 2017, according to the letter sent to Turkson. Robert Redford’s son, Jamie, was paid more than $200,000 to film a video of the ceremony, according to court testimony provided by a former employee of the fund.

Investors and sponsors of the event were told that they would personally meet Pope Francis if they donated enough money, but no such meeting materialized, the letter from the former employees said. The investee companies were promised introductions to deep-pocketed investors and celebrities like Leonardo DiCaprio, according to one of the startup founders. The founder said he didn’t get any meetings.

Harr said no investor money was used to pay for the event, which was instead financed by two sponsors: a foundation and an technology company. He said that investors were present and met with some companies, and that while the firm hoped the Pope would attend one of its events, it never promised anyone a meeting with him.

Conflicts between executives soon emerged. Forte and others began raising concerns in 2017 about the level of spending and lack of accountability to investors, the employee letter shows, and Forte left.

”We believe that the spirit of Laudato Si’, as well as business law, is being violated,” the letter said. “We hope that you will review this letter and decide whether your office should continue to work with the people listed above,” referring to Harr and Ashkar.

Turkson decided to remain involved, though Ashkar quit, saying he didn’t need the hassle, according to Harr. Another venture of Ashkar’s later ran into issues. Last year, The Hult Prize, which he founded and Harr was involved with as a judge, fired Ashkar as chief executive officer after the organization launched an investigation into multiple allegations of sexual misconduct against him and others. The organization said an investigation by law firm Kirkland & Ellis LLP found that Ashkar “leveraged his position, charisma, and business connections to create an insulated atmosphere where he could act without consequence.” Ashkar didn’t respond to multiple calls and emails seeking comment over several weeks.

By the time Laudato Si ran short of money, Harr and Ashkar had each earned hundreds of thousands of dollars each in salaries and advisory fees, a letter sent to investors shows. Harr said he was in “over his head” with regards to deploying investor capital but still put in a lot of work trying to help the investee companies raise money. He also said he allowed overspending on staff costs.

In 2018, as the money ran dry, Harr went to tap investors for more, this time through a newly-formed charitable foundation, not an investment vehicle. His goal this time: to sustainably improve the lives of 10 million people.

But investors stopped receiving reports as to how the fund’s assets were performing, people familiar with the matter said. Over the years, most of the companies have been wound down after failing to raise more capital, Harr said.

Leading religious figures, philanthropists, and Silicon Valley giants continue to lend their support to Harr’s charitable work. Airbnb Inc. was among those to partner with the charity venture, according to the latter’s website. A representative for Airbnb didn’t respond to emails seeking comment.

He also continues to spend time in the Vatican. In a recent social media post of himself posing in the Holy City, he wrote, “I’m not looking for forgiveness. And, I’m way past asking for permission.”