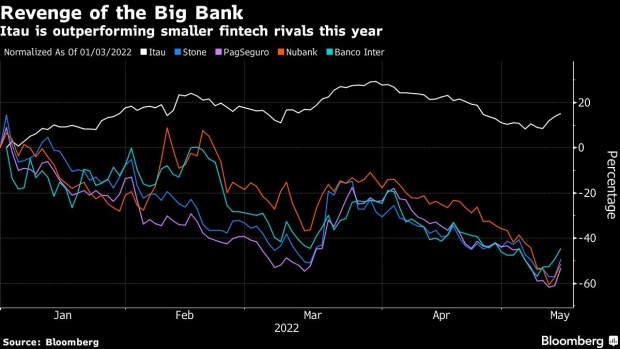 (Bloomberg) -- Latin America’s biggest bank seemed to be losing the race against a raft of upstart fintechs when Milton Maluhy took over as chief executive officer last year.

Itau Unibanco Holding SA had plunged almost 35% in the previous two years, shedding 130 billion reais ($25 billion) in market value, while digital competitors such as StoneCo Ltd. were soaring. Investors’ biggest fear was that Maluhy’s company would be left in the dust, a dinosaur that failed to keep pace with the digital revolution.

It didn’t turn out that way. Rising interest rates and shrinking global liquidity are hammering away at fintech valuations, while industry stalwarts like Itau are seen as safer bets. And so, 15 months into the job, Maluhy can boast a rebounding share price that’s up 18% this year, rising dividends and a list of acquisitions the CEO says will modernize the almost 100-year-old banking giant.

Meantime, financial-technology firms such as Stone and Nu Holdings Ltd. have tumbled as much as 50% this year on skepticism they can deliver on their promises of growth.

“High interest rates and lower demand for credit will require banks to have a lot of operational resilience,” Maluhy, 45, said in response to e-mailed questions, his first interview with international media since becoming CEO. “It will eventually favor those who accumulated more knowledge about the market and have a solid capital structure.”

Itau’s top executive, who started out at the bank in 2002 and has held jobs in everything from foreign exchange and treasury to credit cards, is pushing for even more changes -- and he wants to move fast.

“We need to build a simpler, more agile and efficient organization,” said Maluhy, who previously led turnarounds at Itau’s operations in Chile and Colombia. “Our focus is to speed up more and more this cultural and digital transformation.”

With that goal in mind, the bank is back hunting for acquisitions and partnerships. And it’s pursuing them aggressively: Analysts at Banco BTG Pactual SA said Itau is in “attack mode” in the technology sector.

While regulators have made clear they would bar outright purchases of financial institutions, the bank is finding ways to cut deals. Itau will shell out as much as 1 billion reais in a joint venture with Totvs SA, which offers software that helps companies manage their businesses. And it struck partnerships with Locaweb Servicos de Internet, a web-services provider, and Omie, which offers business-management programs for companies.

The objective is to lead the process of digital transformation through investments and, above all, through a cultural change within the bank, Maluhy said.

Still, there are lingering questions about how the bank will fare against headwinds on the horizon.

“Stiffer competition in the fintech industry will remain a key fee risk for Itau, especially for its cards business,” said Diksha Gera, an analyst at Bloomberg Intelligence. Brazil’s ailing economy and political uncertainty will also weigh on growth, she said.

Maluhy, who is also a member of the Bloomberg New Economy Gateway Latin America advisory board, offered his views on other topics as well:

“The war in Ukraine has led to a spike in commodity prices, which means more inflation around the world,” Maluhy said. “But it also results in stronger economic activity in commodity-producing countries such as Brazil.

“We believe that the central bank will have to raise the Selic rate even further to contain this new inflationary shock, and the backdrop of monetary tightening in the US only contributes in this direction. Rising US rates should put pressure on exchange rates in emerging markets.”

“Our biggest opportunity lies in expanding the operations we already have in Brazil and other Latin American countries,” he said. “We have operations in Chile, Colombia, Peru, Uruguay, Argentina and Paraguay, which are delivering results and showing important advances.

“Our priority with international operations has been to generate value for our shareholders. Acquisitions outside Brazil, due to exchange-rate and tax asymmetry, tend to require a large allocation of capital, which negatively impacts the commitment to shareholders.”

“Our focus is on efficiency, not simply cutting costs,” the CEO said. “Over the past few years, we’ve been reviewing how to best deploy our resources and adapting. Take the number of employees: At the end of 2018, we had 86,800 direct employees in Brazil. In December 2021, that number jumped to 87,340, with an emphasis on hiring technology professionals.”

“The brick-and-mortar bank branch has regained a significant role, and proved to be a valuable asset for us in serving our customers, especially in offering more complex and sophisticated products, such as real estate financing,” Maluhy said. “Our goal is to increasingly combine remote and physical service.”

“Itau has the most complete portfolio of financial products and services on the market, larger than any other player, whether incumbent or fintech,” he said. “Our active customer base is robust, with nearly 60 million people and companies. We have around 3 trillion reais in assets under custody and 1 trillion reais in credit granted.”

With around 70 petabytes of data, Itau “is on a journey of modernizing our systems and migrating to the cloud on a large scale,” he said.