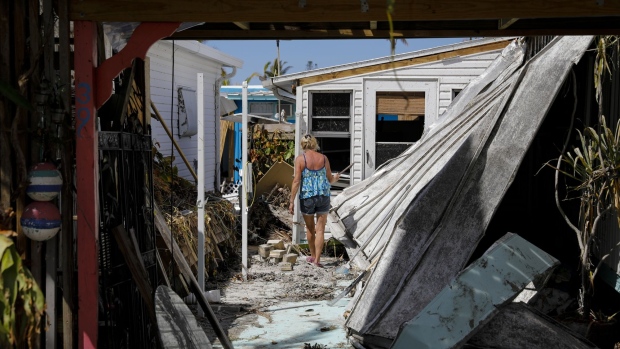 A resident walks inside her damaged house following Hurricane Ian in Matlacha, Florida, US, on Wednesday, Oct. 5, 2022. President Biden and Governor DeSantis have feuded over political issues, including migrants, but are coordinating on assistance for Floridians hit by a hurricane Biden's called "among the worst in the nation's history." , Bloomberg

(Bloomberg) -- Hurricanes and tropical storms across the Atlantic caused about $110 billion in damages and losses this year, making it the most destructive season in five years, according to Munich Re.

Most of those costs stem from Hurricane Ian, which slammed into Florida in September, causing $100 billion in losses, the insurer said in a report.

“Tropical cyclones are one of the biggest risks for insurers,” the report said.

This year was the most destructive hurricane season since 2017, when storms caused $260 billion in damages as Harvey, Irma and other powerful systems battered the US and Caribbean, according to Munich Re.

The Atlantic spurred 14 named storms this year in the six-month season that ended Wednesday, making it an average year in terms of the number of storms as unusually dry air and cooler water suppressed activity through the end of August. Aside from Ian, the other damaging storm this year was Fiona, which knocked out Puerto Rico’s power grid, then hit Atlantic Canada.

About $65 billion of the costs of the 2022 storms which will be borne by insurers, the company said. The insured losses don’t include those covered by the National Flood Insurance Program.