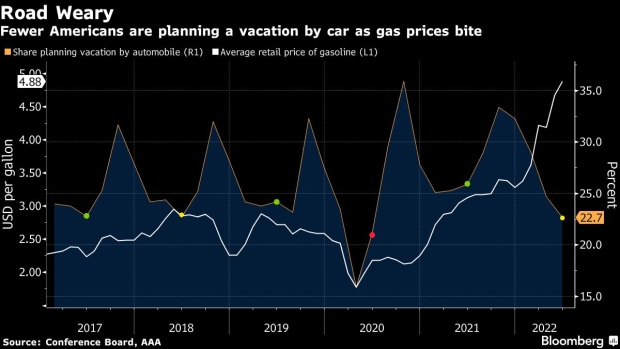 (Bloomberg) -- The summer of “revenge travel” may be slowing as gasoline prices hover near record highs.

Americans planning on taking a vacation by car in the next six months dropped to 22.7% in June, according to data from the Conference Board’s index. That’s the lowest seasonally in over four years, excluding the summer of 2020 when the pandemic caused nationwide lockdowns. Around 36% of Americans surveyed this month intend to take a vacation within the next six months, the weakest June reading for any year in data going back over 40 years, excluding 2020.

The rise of people booking trips in a rush as the summer starts, despite higher costs, is what some refer to as “revenge travel”. But the long-awaited signs of demand destruction could be around the corner as analysts attribute a slowdown in vacation plans to exorbitant prices at the pump. With US retail gasoline prices hovering around an average of $5 a gallon, consumers simply can’t catch a break.

“A summer road trip doesn’t make sense for some Americans given where fuel costs are and how expensive dining out has become,” said Ed Moya, senior market analyst at Oanda. “Everything is becoming too pricey in America and lower and middle income households are feeling the pinch.”

Broader consumer sentiment also dropped to the lowest in over a year as prices from energy to food stretched pockets. High gasoline prices have become a political concern for the Biden Administration which has tried, and so far failed, to cool energy costs. The US President last week called on Congress to enact a temporary pause in gasoline taxes to lower prices at the pump, even as experts warn that it could result in elevated prices in the long term.