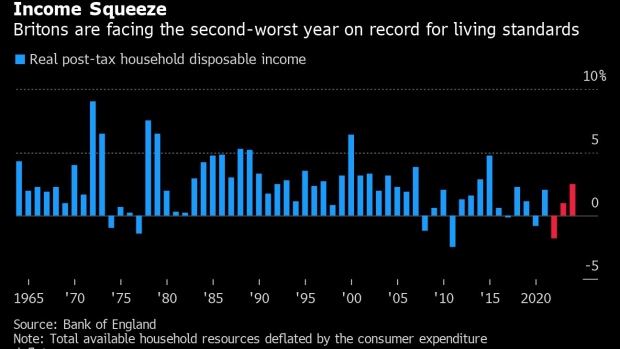 Buildings in lower Manhattan in New York, U.S., on Thursday June 17, 2021. New York state's pandemic mandates were lifted last week, after 70% of the adult population has now been given at least one dose of a coronavirus vaccine. Photographer: Victor J. Blue/Bloomberg , Bloomberg

That’s the impression likely to be on display on Tuesday -- three months since the outbreak of the conflict -- as purchasing manager indexes for May are released within hours from major economies around the world.

Surveys of economists on the probable outcomes of 15 gauges of the indicators from the US and across Europe predict a decline in every single one.

The indexes, also being released for major Asian economies, will offer a company-focused perspective on how the inflation shock caused by the conflict in Ukraine is meshing with the supply-crunch legacy of the pandemic and the drag from China’s persisting coronavirus lockdowns.

The worry that what might follow is stagflation -- a noxious mix of surging prices, growth at a standstill, and rising joblessness -- infected financial markets over the past week and dominated an already fraught meeting of Group of Seven finance ministers.

“Russia’s war of aggression is causing global economic disruptions, impacting the security of global energy supply, food production and exports of food and agricultural commodities, as well as the functioning of global supply chains in general,” the G-7 ministers said in a communique after their gathering in Germany.

Global businesses are likely to echo that lament as executives mingle with political leaders and central bankers in the Swiss mountain resort of Davos for the World Economic Forum starting on Sunday.

“China’s economy is tracking a much weaker path than we forecast just three weeks ago, when we slashed our growth projection for 2022. April’s activity data showed lockdowns under Covid Zero have taken a much heavier toll than expected.”

Elsewhere, the release of the US Federal Reserve’s preferred price gauge, probable interest-rate hikes in New Zealand and South Korea, and the aftermath of Saturday’s election in Australia -- which saw Prime Minister Scott Morrison’s conservative coalition voted out -- are likely to focus the minds of investors.

Click here for what happened last week, and below is our wrap of what is coming up in the global economy.

In the US, the marquee report in the coming week will be the April income and spending release, which also includes the Fed’s preferred inflation gauge.

While the personal consumption expenditures price index excluding food and energy is seen cooling on a year-over-year basis, the median forecast calls for a third-straight 0.3% monthly advance.

Such a pace explains why Fed Chair Jerome Powell has foreshadowed half percentage point hikes at the central bank’s policy meetings in June and July.

The Wednesday release of minutes from the Federal Open Market Committee’s May deliberations may shed more light on what’s become a more aggressive policy response to elevated price pressures.

Powell will also deliver what are billed as “opening remarks” via pre-recorded video at 12:20 p.m. Washington time Tuesday to an economic conference in Las Vegas. He won’t take questions after his appearance, according to the Fed’s weekly agenda.

Among other data on tap, Friday’s income and spending report is forecast to show demand remained solid at the start of the second quarter despite high inflation.

The government will also issue figures on April durable goods orders and new-home sales. S&P Global preliminary May manufacturing and services indexes are set for release on Tuesday.

The Reserve Bank of New Zealand and the Bank of Korea both meet to decide on policy, with the rate-hike front runners expected to push up borrowing costs again.

Indonesia’s central bank also meets, though a majority of economists expect it will hold off hiking interest rates for now.

South Korean export figures will indicate how global trade is holding up in May amid the disruption caused by China’s lockdowns. Inflation figures from Tokyo at the end of the week will show how the price trend is evolving in the capital in May.

In Europe, Germany’s Ifo Business Climate indicator for May, due on Monday, is likely to show a decline from the previous month, presaging the purchasing manager indexes the next day. The week will be punctuated by a holiday on Thursday in key euro zone countries.

Several policy makers are likely to steal the limelight at a time when the global cost-of-living squeeze is morphing into a collective worry about stagflation.

Among multiple other European Central Bank appearances will be one from President Christine Lagarde, who’s scheduled to make remarks in Davos on Wednesday.

Also of interest in the week after market volatility drew the concerned attention of G-7 ministers will be financial stability reports presented by Sweden’s Riksbank on Tuesday and the ECB on Wednesday.

The Bank of Israel is expected to raise rates by at least 25 basis points on Monday, continuing a hiking cycle that began in April in the face of rising inflation.

Turkey’s central bank will likely hold rates steady for the fifth month in row on Thursday, even as annual consumer inflation reaches 70% for the first time since the 2000s.

In Ghana, policy makers are seen hiking on Monday to curb inflation that’s reached an 18-year high of 23.6% -- more than double the top end of a target band. For Nigeria, it’s probably a hold on Tuesday as it awaits a stronger economic outlook.

Look for first-quarter output data from Peru on Monday to show that growth rebounded despite headwinds from inflation, rising interest rates, and ongoing political turmoil.

Inflation reports from the region’s two biggest economies may offer some long-sought good news for their respective central bankers: Mexico is seen posting a negative bi-weekly print, while Brazil’s monthly reading may ease to a 12-month low.

Policy makers at both banks were initially slow to react to the dramatic run-up in consumer prices that started in 2020, but economists now see peak inflation for both, finally, in the second quarter.

Later Tuesday, Chile’s central bank posts its survey of traders, while shopping center and supermarket sales data are on tap from Argentina.

The ongoing strike by Brazil’s central staff may continue to hold up a raft of data, but Mexico will release trade, current account, retail sales, final first-quarter output, and Banxico’s May 12 meeting minutes.

The bank’s eighth straight hike raised its key rate to 7%, and most analysts forecast another 150 basis points of tightening -- though some as much as 250bps. Typically close to 15,000 words, Banxico’s minutes always give investors and analysts plenty to ponder.