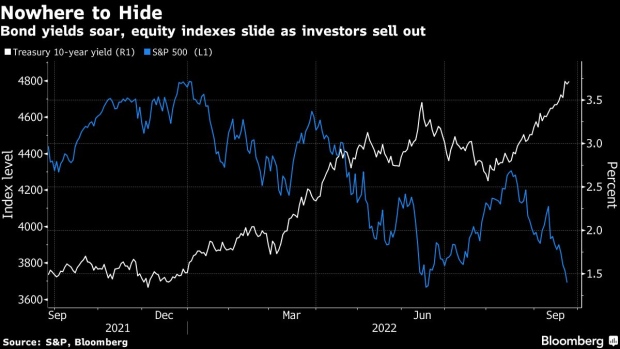 US government debt slid across the curve, with two- and five year yields surging as much as 14 basis points to a fresh 15-year high. German bund futures also tumbled. The UK government’s package of tax cuts and regulatory reforms, announced Friday, continued to push borrowing costs higher in the new week. Yields on two-year gilts rose by more than 60 basis points, the most since 2009. Equities and other risk assets dropped as the pound sank to a record low.

“Markets are continuing to digest the implications of the UK’s fiscal statement and the massive move in gilts,” said Su-Lin Ong, head of Australian economic and fixed-income strategy at Royal Bank of Canada. Investors “are fretting over the pressure on government to deliver cost of living relief, with any loosening in fiscal settings adding pressure on central banks to do more of the heavy lifting,” she said.

Bonds and stocks are tumbling this year as the Federal Reserve leads central banks in a rapid shift away from the monetary policies of the pandemic, which involved keeping interest rates near zero and buying debt to keep yields down. Sovereign bond markets globally are on course for the worst year since 1949, when Europe was rebuilding from the ruins of World War Two, according to Bank of America Corp. strategists.

The yield on 10-year Treasuries climbed as much as 11 basis points to 3.79% on Monday, while the two-year bond yield touched 4.345%. The pound dropped as much as 4.7% to $1.0350, setting off declines across most major currencies against the dollar. Stock indexes fell in Europe and Asia, while E-mini S&P futures indicate cash stocks will also drop at the open.

“It’s a sell everything world!” said James Wilson, a senior portfolio manager in Melbourne at Jamieson Coote Bonds. The VIX gauge of implied volatility for the S&P 500 -- often called a fear gauge for stocks -- may have some catching up to do with the MOVE index for Treasuries, he said.