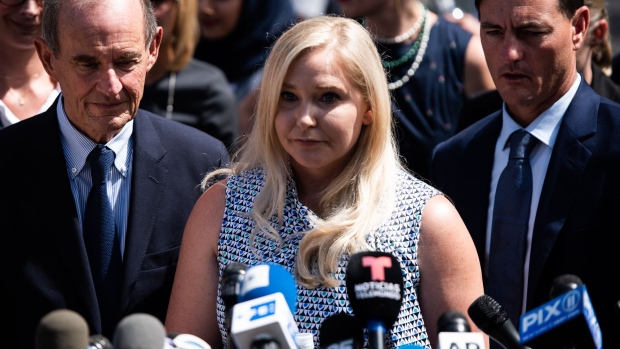 (Bloomberg) -- Almost exactly two years after she was arrested at her million-dollar New Hampshire hideaway, Ghislaine Maxwell is about to find out if she will spend the rest of her life in prison.

Maxwell, 60, will be sentenced today on charges that she engaged in a decade-long scheme to lure and groom underage girls for sexual abuse by former boyfriend Jeffrey Epstein, sometimes participating in the abuse herself. She was convicted in December in a verdict that was hailed as long-delayed justice for Epstein’s victims.

A number of those victims, including Prince Andrew-accuser Virginia Giuffre, will be present in the federal courtroom in Manhattan and will be given a chance to speak before US Circuit Judge Alison Nathan imposes her sentence. Maxwell herself will also have what may be her last opportunity to speak publicly. She chose not to testify in her own defense at her month-long trial.

As part of her conviction, the jury found that Maxwell and Epstein transported Giuffre as a teen across state lines for sex. Prosecutors are asking for a sentence of 30 to 55 years in prison for Maxwell based on her conviction of sex-trafficking minors.

Earlier this year, Giuffre settled a civil suit against Prince Andrew, one of several powerful men she claims the financier Epstein “lent” her to for sexual abuse as a teenager. Andrew has denied the claim.

“She made the choice to conspire with Epstein for years, working as partners in crime and causing devastating harm to vulnerable victims,” prosecutor Maurene Comey argued in the government’s sentencing memo to the court. “She should be held accountable for her disturbing role in an extensive child exploitation scheme.”

Maxwell has asked that she be given less than six years behind bars. In her own sentencing memo, Maxwell argued for leniency, saying she and her siblings had been mentally and physically abused as children by their father, British publishing tycoon Robert Maxwell. She also repeated her argument at trial that prosecutors scapegoated her for the crimes of Epstein, who was found dead in his jail cell in 2019 while awaiting his own trial for sex-trafficking.

Legal experts said they didn’t think Maxwell’s arguments for leniency would be effective, especially with several of her accusers speaking at her sentencing.

“The first thing judges want to know if you plead guilty is if you identify with your victims,” said Justin Paperny, a former UBS AG banker who served 18 months for securities fraud and is now a prison consultant.

“In this case, Maxwell said ‘Yeah, there are victims but I didn’t create it. I didn’t do anything wrong. It’s just because I was friends with Epstein. If anything, I’m the victim,’” Paperny said. That attitude “doesn’t sit well with a sentencing judge when there are victims whose lives have been torn and ripped apart by her pedophile friend,” he added.

Moira Penza, a former federal prosecutor, agreed. “Maxwell’s utter lack of remorse will undoubtedly weigh against her at sentencing,” she said.

Though Maxwell is the only person to have been convicted for the scheme, ties to Epstein led to career downfalls for former Barclays Chief Executive Officer Jes Staley and Apollo Global Management co-founder Leon Black and have besmirched the reputations of Prince Andrew, Bill Gates, Leslie Wexner and many other prominent men. All have denied knowing about or participating in inappropriate conduct with Epstein.

Prosecutors depicted Maxwell as indispensable to Epstein’s predations, befriending the girls, taking them shopping and acting as a big sister to them before pushing them into sexual encounters with Epstein.

In exchange, Epstein paid her handsomely. Though Maxwell grew up amid great wealth, prosecutors presented evidence that she “downsized” apartments after the death of her father, who was found to have diverted hundreds of millions of pounds from his companies’ pension funds. A JPMorgan Chase & Co. banker testified that Epstein transferred nearly $31 million to her between 1999 and 2007. One of the victims identified only as “Kate” testified that Maxwell told her that Epstein “got” her a New York townhouse.

Maxwell was arrested by the Federal Bureau of Investigation in July 2020 at a sprawling New Hampshire home that Sotheby’s described as “an amazing retreat.” She’s been in federal custody at the Metropolitan Detention Center, the federal jail in Brooklyn. Nathan denied her requests for bail, saying her wealth, multiple passports and global contacts rendered her a flight risk.

Four women took the stand against Maxwell, describing how they were sexually abused as teenagers from 1994 to 2004 at Epstein’s Upper East Side mansion, Palm Beach estate and New Mexico ranch, as well as Maxwell’s London townhouse, among other luxury properties.

One of those women, Annie Farmer, testified she was a 16-year-old high school student in 1995 when she first met Epstein in New York while visiting her sister who worked for him at the time. He later invited her to a movie and began stroking her leg and shoe in the theater.

Despite that encounter, she later accepted Epstein’s invitation to his New Mexico ranch expecting to join a group of college-bound students. Farmer said she also thought it would be safe because Maxwell, his girlfriend, would be there.

“I didn’t think anything would happen” with her there, Farmer said. When she arrived, she found she was alone with the couple, and she wound up being sexually abused by both of them, she said.

Farmer, Giuffre and another victim who testified at the trial are slated to address the court before Maxwell’s sentencing, as well as three other women who say they were victimized by Maxwell and Epstein.

“Survivors of sexual abuse never quite get over that experience, and their treatment at the hands of Mr. Epstein will forever hang over them,” said Barry Salzman, who represents 20 of Epstein’s victims as a partner at Barasch & McGarry in New York. “Seeing Ms. Maxwell face a sentence comparable to the harm her actions caused will help to offer a small level of closure for these brave, strong women.”

The case is US v Maxwell, 20-CR-330, US District Court for the Southern District of New York (Manhattan).