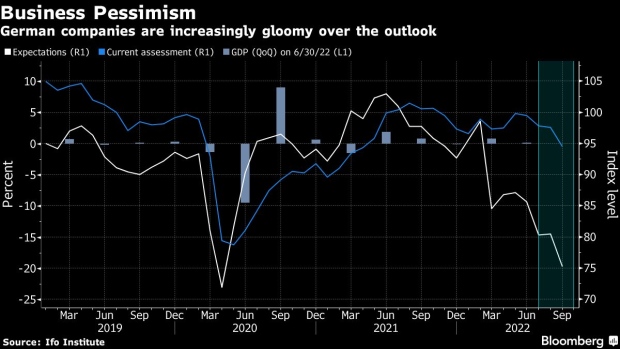 A gauge of expectations by the Ifo institute released Monday slid to 75.2 in September from 80.3 in August. That’s the lowest since April 2020. Analysts had predicted a drop to 79. An index of current conditions also fell.

“Companies assessed their current business as clearly worse,” Ifo President Clemens Fuest said in a statement. “Pessimism regarding the coming months has grown decidedly. In retail, expectations have fallen to a record low. The German economy is slipping into recession.”

The slump in Europe’s largest economy is deepening as the surging cost of living erodes demand, survey data from S&P Global signaled on Friday. The report solidified concerns that Germany, with its strong exposure to the fallout from President Vladimir Putin’s war in Ukraine, may already be contracting.

Lower Russian natural gas shipments in retaliation for Western sanctions threaten the country’s outsize manufacturing sector while darkening the mood of consumers. Volkswagen AG, Europe’s biggest carmaker, has is exploring options to move production around its global facilities if gas shortages persist much beyond this winter.

The government, meanwhile, is stepping up preparations for potential gas rationing, even after managing to fill storage facilities and rushing to replace missing Russian supplies with deliveries from other countries.

Inflation figures on Thursday will probably show an acceleration above 10%, according to economists. A report on euro-area prices the following day may cement the case for more interest-rate increases from the European Central Bank -- measures that Bundesbank President Joachim Nagel has said will weigh on growth.