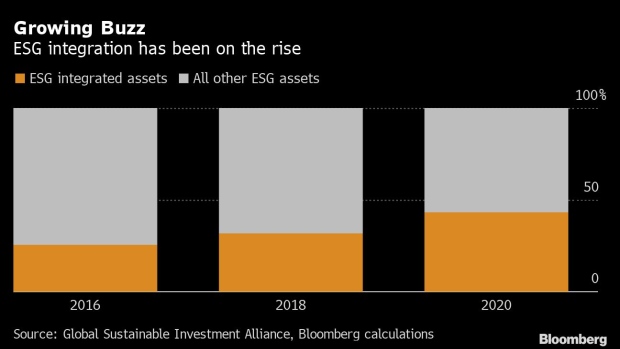 (Bloomberg) -- Some of Europe’s biggest asset managers are starting to drop a once-ubiquitous ESG label from their company filings amid concern that regulators will no longer tolerate vague descriptions of environmental, social and governance investing.

Money managers including Allianz Global Investors and DWS Group have either stopped using the catch-all term “ESG integrated” in their public documents or are playing down its relevance in interactions with investors, according to people familiar with the matter who asked not to be identified discussing internal changes. They said the language choice followed new European disclosure rules.

For those trying to track and measure ESG assets, it’s a welcome development, as “integrated” can be hard to decode. “If you claim to do ESG integration, that means nothing,” said Hortense Bioy, global director of sustainability research at Morningstar. “You have to define it, because there is no common definition.”

It’s the latest sign that Europe’s landmark anti-greenwash rulebook is reining in an industry that ballooned to more than $35 trillion last year. The Sustainable Finance Disclosure Regulation was enforced in March, but already in the lead-up to its arrival, European investment managers stripped the ESG label off $2 trillion in assets in anticipation of stricter rules.

A spokesman for Allianz GI said that ESG integration remains an important category that’s underpinned by a structured and systematic process.

Asset managers face a new regulatory era. That notion was recently underpinned by news of U.S. and German probes into the investment unit of Deutsche Bank AG. A spokeswoman for the division, DWS Group, referred to comments in its annual report.

The firm has repeatedly rejected allegations of greenwashing brought against it by its former sustainability head, Desiree Fixler. Her whistleblower testimony is now informing the probes being conducted by the U.S. Securities and Exchange Commission, and Germany’s securities regulator BaFin.

Europe’s anti-greenwash rules contain some key sub-clauses that are forcing the asset management industry to substantiate their ESG claims. SFDR contains an Article 8 to define “light” green assets, and an Article 9 for “dark” green assets. The shade of green refers to the degree of importance accorded to ESG concerns. The EU is still working on more detailed descriptions of what the articles can comprise to stamp out any lingering mislabeling.

“Hopefully that will bring more clarity as to what all those funds are doing,” Bioy said in an interview. Thanks to stricter regulations, whatever asset managers say going forward “is going to be binding ... because the questions will be more specific, you are going to have to provide details, and then you are going to be bound to that.”

The adjustments sweeping through Europe’s asset management industry are just beginning to make their way to the U.S., where ESG-labeled investment products this year surpassed those in Europe for the first time. Globally, ESG assets are on track to exceed $50 trillion by 2025, according to Bloomberg Intelligence.

A Bloomberg News analysis of reports published by European asset managers over the past half decade shows that most have cut back on their use of the term “ESG integrated,” suggesting the official tally of ESG assets may shrink as more rigorous labeling is applied.

But not all big European asset managers are moving away from the term “ESG integration.” According to the Bloomberg analysis, NN Investment Partners, which is being bought by Goldman Sachs Group Inc., is among firms to have used the label more often this year than in the past.

The Dutch asset manager says it applies “stringent criteria” before labeling anything ESG integrated, and that all claims are subject to an external audit. NN says that classifications within EU regulation are “relatively in line with our internal and already audited categorization of ESG-integrated funds, sustainable and impact funds.” The manager plans to have at least 80% of its total assets labeled “ESG integrated” by 2023, it said.