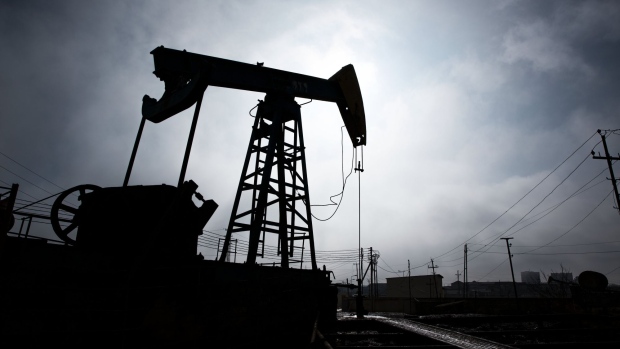 A pumpjack is silhouetted as it operates in Baku, Azerbaijan, on Sunday, March 18, 2018. Two years after descending into junk, Azerbaijan's shortest path to winning back its investment grade is by rebuilding the stash of petrodollars it raided during a recession and a banking meltdown, according to Fitch Ratings. Photograph: Taylor Weidman/Bloomberg , Bloomberg

(Bloomberg) -- Fewer than half of 150 major financial institutions have restricted their business with the oil-and-gas sector, even though many of them have made high-profile pledges to reduce their contribution to climate change, according to new research by the Paris-based nonprofit Reclaim Finance.

The analysis, called the Oil and Gas Policy Tracker, looked at governance policies at 60 banks, 60 investment institutions and 30 insurers. Of the whole group, 74 belong to the Glasgow Financial Alliance for Net Zero(1), an initiative that requires members to end their contribution to global heating by mid-century. More than half of the companies—including 20 of the GFANZ members—have no policies governing their oil-and-gas business.

Among the companies with policies in place, the most popular restrictions are bans on several kinds of unconventional oil. More than a third of the firms limit Arctic and oil-sands work, with fewer prohibitions on shale and ultra-deepwater oil. Many of these policies are weak or flawed, according to Reclaim Finance and more than 15 NGO partners in the analysis. Forty-six of 54 rules governing Arctic oil and gas, for example, fail to use the common guidelines developed by a unit of the Arctic Council, a group of countries and peoples with land in the far north.

Just five companies, all banks, have quit or limited financing oil and gas expansion, according to the research.

“We wanted to have a better understanding about how it is possible to have—on one side—financial institutions that are claiming to be willing to do what it takes to limit global warming to 1.5°C and adopting policies on the most polluting sectors, while at the same time it seems like it doesn’t change,” said Lucie Pinson, director of Reclaim Finance.

The analysis publishes at a moment when the chasm is widening between economic business-as-usual and the health of the climate. The latest report from climate science’s most authoritative body concluded that without a comprehensive, all-inclusive and collaborative effort among governments, the private sector, civil society and beyond, humanity “will miss a brief and rapidly closing window of opportunity to secure a livable and sustainable future for all.”