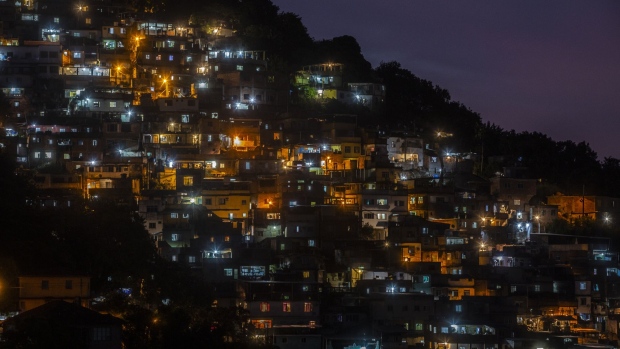 Lights illuminate buildings at night in Rio de Janeiro, Brazil, on Monday, May 24, 2021. Brazil's lower house approved the main text of a bill that paves the way for the privatization of state utility Eletrobras. Photographer: Dado Galdieri/Bloomberg , Bloomberg

(Bloomberg) -- Eletrobras, the power utility set to be privatized, received proposals from 14 banks to coordinate what could be one of the biggest equity sales by a Brazilian firm.

The firm hired local investment banking boutique Laplace Finanças to help enlist four global coordinators and one leading bank for retail distribution for a public share sale of voting shares that could reach 103 billion reais ($18 billion), in which the government aims to reduce its stake to 45%, according to people familiar with the matter. Banks may be selected as soon as November, the people said, asking not to be identified discussing a private matter.

Brazil’s lower house approved a plan to privatize the power giant in June, allowing the economy ministry to raise funds to offset a drought-related jump in electricity prices as the economy tries to reopen. Proceeds from the privatization will be used to reduce consumer electricity bills by up to 7.4%, according to the economy ministry, with another portion going to public development programs.

The government plans to first sell new voting shares in a capital increase of about 23 billion reais around the beginning of next year, according to development bank BNDES, which is organizing the sale. Additional offerings of government-held shares could be necessary to cut its stake to 45%, with sales volumes potentially reaching more than 80 billion reais, BNDES has said. The government plans to keep a so-called golden share, that gives it veto power in some decisions.

The transaction needs approval from the Federal Court of Accounts, according to BNDES. The government, including BNDES, holds 61% of the company’s total capital.

The deal was approved this week by a government committee and is going forward even after a political crisis that flared up and hit markets, the people said. Two of Brazil’s Economy Ministry secretaries asked to step down this week after the government announced a plan to increase the basic income for the poor by surpassing a spending ceiling.