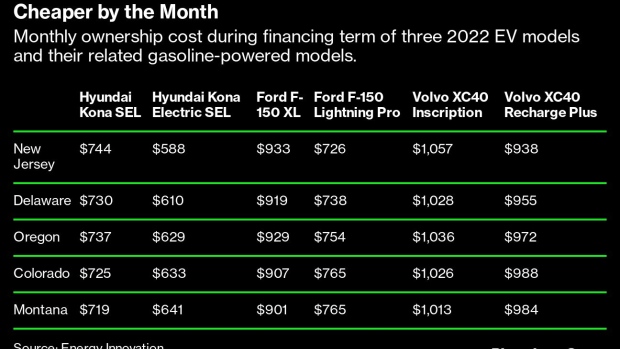 The Ford F-150 Lightning, month-to-month, costs less than its gas-powered sibling in every US state. Photographer: Michael Nagle/Bloomberg , Bloomberg

(Bloomberg) -- What’s cheaper to buy, a gasoline car or an electric one? The answer might surprise you.

Whether new or used, gas-powered or pure plug-in, in recent months manufacturer’s suggested retail prices (MSRP) on all cars in the US has led to some serious sticker shock.

In April, the average new vehicle listing price was above $45,000, according to Cox Automotive, a number first reached in September (and an all-time-high at that point).

The prices reflect low inventory across the US, caused in large part by continued supply chain disruptions. The total supply of available unsold new vehicles stood at 1.13 million units at the end of April, Cox reported, compared with 1.10 million vehicles in March. That’s about 800,000 fewer vehicles than the same period in 2021; and 2.2 million less than in 2020.

So yes, there are fewer cars of all kinds at US dealerships, pushing up the sticker prices on those vehicles. Still, that doesn’t automatically mean that a new electric car will cost you more.

According to a recent report from Energy Innovation Policy and Technology LLC, a climate policy think tank, in many states, across a number of models, electric cars are cheaper to buy than traditional gas cars. The report focuses on the terms around the purchase and financing of EVs, and what the monthly cost will be.

“What does the average consumer look at? Our research is mostly focused on that question — how people purchase cars, how they finance them,” says Robbie Orvis, the lead researcher and author of the study. “The day you drive it off the lot, you don’t want to spend more on an EV.”

About 85% of car buyers in the US finance vehicle purchases. Key factors for those buyers, the report notes, are “how much they’ll have to pay to own and operate a vehicle each month, not necessarily how much a vehicle will save them over its lifetime.”

In most US states, according to the report’s findings, an electric car can be cheaper on a monthly basis than a comparable gasoline car. Orvis’s analysis looked at: financing costs; state taxes and fees;  state and federal rebates and tax credits, especially the $7500 federal tax credit; fuel costs; maintenance costs; and insurance costs.

According to Energy Innovation’s analysis, the electric versions of the Kona SEL and the F-150 are cheaper to own in every state across the country. “I am surprised at how economic some of the vehicles are,” Orvis says. “The fact that two of the models, including the F-150, were cheaper in every single state, I didn’t expect to see that.”

Even so, Orvis cautions that “the big picture numbers aren’t reflective of how people pay for their vehicles. When you finance a car purchase, it’s a lot more manageable.”

Matt Haiken, the owner and dealer principal of the Prestige Collection Auto Group in northern New Jersey, says EV prices and financing options are even more competitive right now, given the supply shortages and lower inventories on traditional gas cars. “It’s making the delta between EV and internal combustion engine cars even greater,” Haiken says. His group consists of four dealerships (two Volvo; one Lincoln; one Polestar). “Also, there were discounts on cars before that are virtually gone now,” he adds — another factor making the gas cars costlier.

That’s even more true for sales at Haiken’s dealerships in New Jersey. “It’s the No. 1 state in the country to own an EV,” Orvis says. The state offers a $5,000 Charge Up New Jersey rebate when you buy or lease the car; plus, there is no purchase tax on EVs. Then, when combined with other offers and the federal subsidies and breaks, “they’re really good incentives.”

Among the least advantageous states for EV purchases, according to Orvis’s research, Georgia leads the list, with the highest annual tax on EVs and no state rebate at all. And a surprising find: California offers many EV incentives but those are offset by the high price of electricity.

Haiken, who says he started buying up EVs from around the country back in 2016 and 2017 for his dealerships, believes the US is near a tipping point. He’s confident EV costs will start to come down so that the cars will be more affordable to a wider range of people.

“It’s night and day different now,” he said. “Everyone is coming in and asking for electric. It’s a very diverse group. For those who don’t decide to buy an EV now, they’ll make a comment like, ‘This is my last ICE [internal combustion engine] vehicle.’”