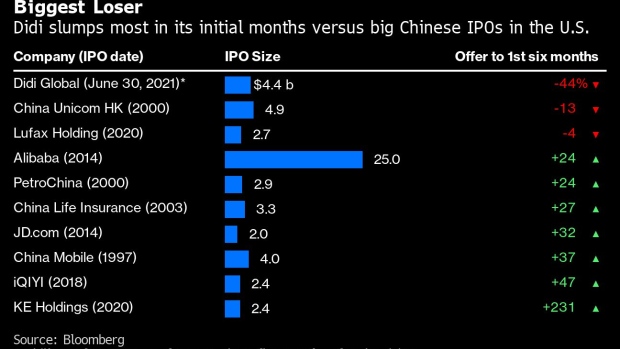 (Bloomberg) -- Even by the volatile standards of Chinese stocks, the swings in Didi Global Inc. on Friday were extraordinary.

In the span of just a few hours, shares of the ride-hailing giant flipped from a 16% gain to a 12% loss, bounced back into positive territory, then turned lower yet again. And that was all before the opening bell in New York.

By day’s end Didi had plunged 22%, catalyzing losses in U.S.-traded Chinese stocks that now amount to more than $1 trillion since February.

Friday’s gut-wrenching ride -- triggered by Didi’s announcement of plans to switch its listing to Hong Kong from New York just five months after going public -- shows how perilous betting on Chinese equities remains more than a year into Xi Jinping’s campaign to remake the country’s tech sector along with much else in Asia’s largest economy.

While the broad contours of Xi’s vision are clearer than they were last November, the world is still in the dark on policy details that could prove crucial to the future of China’s biggest listed companies. Knee-jerk hopes that Didi’s announcement might signal an inflection point in the government’s crackdown quickly faded as the company’s 127-word statement left investors groping for answers on how the U.S. delisting would play out.

The bigger question now hanging over Chinese stocks: How much pain is Xi willing to inflict on investors as he tightens his grip on the data-rich private sector and tries to make China’s economy more equitable? Perhaps the only certainly is that shareholder interests will take a distant back seat to those of the Communist Party.

Didi’s travails “serve as a reminder of the regulatory risks in Chinese stocks,” said Jun Rong Yeap, a market strategist at IG Asia.

The selloff -- which sent the Nasdaq Golden Dragon China Index down by the most since 2008 on Friday -- has been particularly painful for money managers and Wall Street analysts who turned bullish on Chinese equities in recent weeks. HSBC Holdings Plc, Nomura Holdings Inc. and UBS Group AG all turned positive in October, citing reasons including cheap valuations and receding fear of regulation from Beijing. BlackRock Inc. and Fidelity International were among big asset managers making similar arguments.

Didi’s delisting plan came at the urging of Beijing, which opposed the company’s New York IPO because of concerns about potential leakage of sensitive data to authorities in the U.S., China’s main geopolitical rival, according to people familiar with the matter.

While Didi said in its statement that existing investors would be allowed to convert their holdings into new publicly traded shares, the company provided few details on the mechanics of changing its listing and the potential implications for shareholders. A Didi representative didn’t respond to a request for comment on Friday.

The saga fits a pattern of regulatory surprises since last November, when Beijing torpedoed the blockbuster IPO of Jack Ma’s Ant Group Co. days before it was due to start trading. Xi has made clear that Communist Party priorities -- including data security, tighter control over tech giants, and more equitable distribution of wealth under the “common prosperity” framework -- take precedence over the treatment of local and international investors. Didi’s delisting suggests Xi is becoming more confident he can achieve his aims without the help of U.S. capital markets.

Optimists argue that much of this is already priced in. Alibaba Group Holding Ltd. offers just one example of how far valuations have tumbled: Shares of the e-commerce giant trade at an all-time low of 13 times analysts’ projected earnings for the next 12 months, down from almost 30 a year ago. The stock’s 20% valuation premium over Facebook parent Meta Platforms Inc. has turned into a 34% discount, according to data compiled by Bloomberg.

The slump has created buying opportunities for investors with longer time horizons, according to Sam Le Cornu, co-founder and chief executive officer of Stonehorn Global Partners, which has been adding to its Alibaba holdings. But Le Cornu also cautioned in an interview with Bloomberg Television on Friday that the path forward for China’s tech industry is likely to remain rocky.

Didi is targeting March for a filing on its Hong Kong listing, according to people familiar with the matter. The scale of the undertaking is daunting: Apart from the technical logistics of determining a fair price, management will also have to contend with potential lawsuits.

What’s more, there’s no guarantee that Hong Kong will sign off on the plan. Didi’s original motivation for pursuing a U.S. listing was based in part on an insistence from Hong Kong regulators that the company obtain proof of the legality of its business -- a difficult ask given many of the company’s drivers remain unlicensed.

More broadly, regulatory risk for Chinese companies shows few signs of dissipating. Beijing is said to be drafting regulations to effectively ban companies from going public on foreign stock markets through variable interest entities, while the U.S. government is pushing ahead with efforts to boot Chinese companies off American stock exchanges for not complying with Washington’s disclosure requirements.

Other potential shoes to drop include a final package of regulatory penalties against Didi, Ant Group’s restructuring, details of Xi’s master plan for tightening the government’s grip on big data, results from a sweeping corruption probe into China’s finance industry, new regulations on Macau casinos and the fate of over-indebted real estate developers like China Evergrande Group.

Read more: Here’s Where Xi May Strike Next in China’s Regulatory Crackdown

“Capital will only go where there’s confidence,” Le Cornu said. “If you continue to put a cloud of uncertainty around the regulatory environment, people aren’t going to be buying these stocks.”