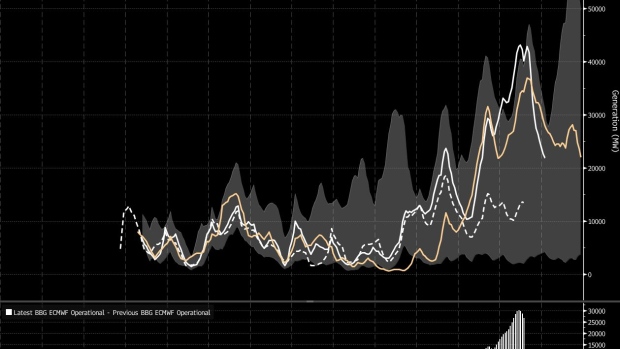 Wind turbines beyond a motorcyclist in Brandenburg, Germany, on Monday, May 2, 2022. European leaders have promised to scale up the continent's renewable-power capacity while reducing imports of Russian gas, but builders say fast-tracking the energy transition means unraveling red tape and reconciling lofty, national climate ambitions with the limited capacity of most local authorities to implement them. , Bloomberg

(Bloomberg) -- Little wind in Germany is worsening the energy crisis in Europe’s biggest economy and risking driving prices even higher.

The nation has the region’s biggest wind power capacity, but calm weather forecast to last into the first week of July means that actual output will remain very low. The day-ahead power contract advanced more than 3% on Wednesday to near the highest level since March.

Germany relies more than most nations in the region on renewables and when the wind doesn’t blow or it’s cloudy, prices rise as more expensive coal and gas plants need to be switched on. The slump in wind generation coincides with lower gas flows from Russia, which has sent prices for the fuel rallying again after a lull earlier in the month.

French day-ahead prices also advanced for a second time in three days. The nation is Europe’s biggest producer of nuclear power, but the fleet of 56 reactors is blighted by problems, including longer than normal maintenance.

Total output remains at about 50% of capacity, according to data from grid operator RTE. The French unions have also called strikes that may last until the end of July, which will likely curb output from time to time.