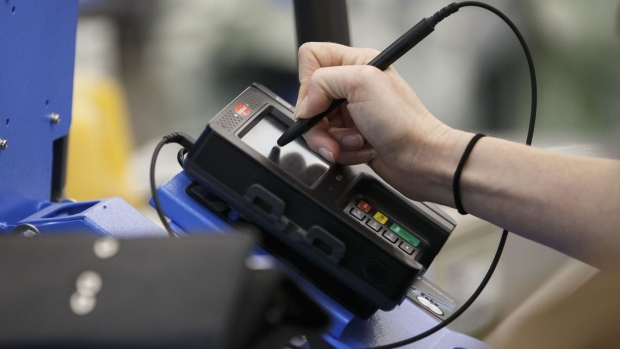 A customer signs for a purchase with a Barclaycard MasterCard Inc. chip credit card at a Wal-Mart Stores Inc. location in Burbank, California, U.S., on Tuesday, Nov. 22, 2016. Consumer hardline retailers are hopeful Black Friday will provide a strong start to the holiday shopping season, but any lift may come at the expense of margins, as the landscape has become increasingly promotional. Photographer: Patrick T. Fallon/Bloomberg , Bloomberg

Over the past year, dozens of top merchants -- from PetSmart to Macy’s Inc. -- have added the ability for customers to split up their purchases and pay them off over time. Even Amazon.com Inc. is planning to get in on the action. Consumers have flocked to the services, and spending with buy-now, pay-later providers is expected to soar to $100 billion this year.

The option’s sudden popularity has sparked concern among investors that the burgeoning space may eat away at the share of customer spending now captured by credit-card issuers. This week, card executives shrugged off the looming threat.

“That’s not really a big competitive threat to us,” American Express Co. Chief Executive Officer Steve Squeri told analysts on a conference call Friday. “It tends to be targeted at low FICO, it tends to be targeted at a lot of debit-card users. It’s used as a customer-acquisition vehicle, and that’s just not the game that we’re playing,” he said, referring to Fair Isaac Corp. ratings of borrower riskiness.

Indeed, a September study by TransUnion showed that users of buy-now, pay-later products and point-of-sale loans actually have more credit products -- including credit cards -- in their wallets than the general credit-active population.

Retailers are increasingly getting frustrated by the high costs associated with offering buy-now, pay-later options to their customers, according to some of the country’s largest credit-card providers.

“The economic model for buy-now, pay-later is still very early, and the economics haven’t settled down,” Discover Financial Services CEO Roger Hochschild said in an interview Thursday. “I have heard from merchants that, over time, unless they see very significant value, they’ll be reluctant to pay more than they do to accept other forms of payment.”

Credit-card companies have long faced retailers’ ire over their so-called swipe fees, which generally amount to 2% of a purchase’s value. While buy-now, pay-later providers often offer consumers 0% interest, they typically charge merchants around 5% of a transaction’s price.

Buy-now, pay-later providers, for their part, argue that their offerings entice customers to spend more with a retailer. Afterpay Ltd., for instance, touts that a merchant’s average order value increases by 40% after adding the service as an option at checkout.

“They’re going through that evaluation today,” Synchrony Financial Chief Financial Officer Brian Wenzel said in an interview Tuesday. “Over the last six months, the merchants are starting to realize there’s a high cost to these short-term pay-in-four products, and are they getting the value, the incremental sales?”