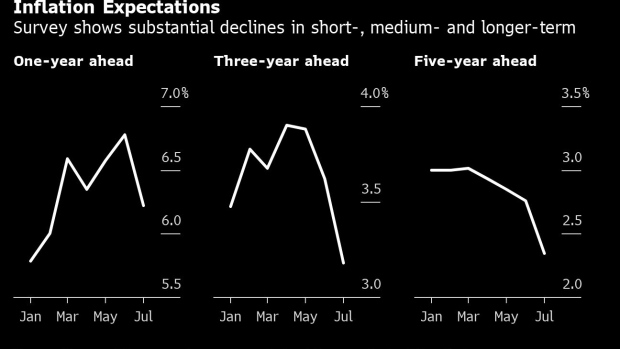 A customer refuels a car at a gas station in San Francisco, California, U.S., on Thursday, Oct. 21, 2021. American drivers will continue to face historically high fuel prices as gasoline demand surged to the highest in more than a decade. , Bloomberg

(Bloomberg) -- Consumer expectations for US inflation over the coming years declined sharply in the latest survey by the Federal Reserve Bank of New York, a finding that may ease the Fed’s concern about ever-rising prices getting baked-in to household behavior.

Expectations for US inflation three years ahead fell to 3.2% in July, from 3.6% the previous month, according to the New York Fed’s Survey of Consumer Expectations. It was the second straight monthly drop. The outlook for inflation in the coming year fell to 6.2% from 6.8%.

US inflation has surged to four-decade highs in the past year, driven by pandemic-related supply shortfalls and soaring commodity prices, as well as strong consumer demand bolstered by fiscal stimulus and low interest rates.

The Fed, which is seeking to rein in prices via higher rates without tipping the economy into recession, says there’s a risk that rising prices will lead American households to anticipate more of the same in the future -- an expectation that could prove self-fulfilling.

Relief at the Pump

The drop in gasoline prices over recent weeks played a big part in easing household concerns. The New York Fed survey found that consumers now expect gasoline to rise by just 1.5% over the coming year, down more than eight percentage points from March. There was also a sharp drop in expectations for food-price inflation.

Relief at the pumps will likely contribute to a lower headline rate of inflation for July when the Labor Department releases the data on Wednesday. Economists expect the overall consumer-price index to rise just 0.2% from a month earlier, compared with 1.3% in June, while the annual rate declines.

Still, almost all inflation measures are running well above the Fed’s 2% target, even if there were some signs of a slowdown last month.

Expectations for rental-price increases in the coming year dipped below 10% for the first time since January, according to the New York Fed. A separate survey by Fannie Mae, also released Monday, estimates that rents will rise 7.6% over the period, while home prices are expected to increase 3.5%.

The current bout of high inflation is also likely to keep biting into household budgets, according to the New York Fed’s survey.

It found that the median year-ahead expectation for spending growth -- without adjusting for inflation -- dropped to 6.9% in July, from a series high of 9% in May. The decline was broad-based across age, education and income groups.

The Fed’s online poll is based on a rotating sample of about 1,300 households.