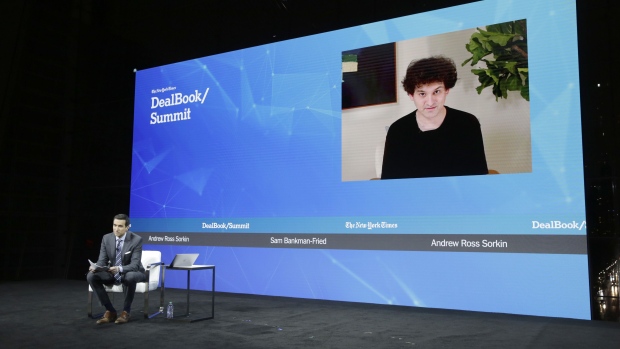 (Bloomberg) -- Sam Bankman-Fried, who at one point was worth $26 billion, claims he now has “close to nothing.”

The fallen crypto mogul held all his assets in his now-bankrupt FTX exchange and sister trading house Alameda Research, he said in a video interview with columnist Andrew Ross Sorkin at the New York Times DealBook Summit on Wednesday.

Bankman-Fried, 30, who remains in the Bahamas, said he’s left with just one working credit card linked to a bank account with $100,000. He added that he’s disclosing everything and has no hidden funds.

Once considered the crypto industry’s wunderkind, Bankman-Fried is now at the center of legal and regulatory probes into whether his empire mishandled customer funds. The restructuring expert who took over FTX in bankruptcy, John J. Ray III, has said it was the worst failure of corporate controls he’d ever seen.

In a sworn declaration last month, Ray said advisers told financial institutions to freeze withdrawals and reject any instructions from Bankman-Fried. The documents also indicated that Alameda had lent $1 billion to Bankman-Fried and that FTX Group funds were used to buy homes and other personal items for employees.

Bankman-Fried was asked about the company’s real estate purchases, including reports that his parents were provided with a home.

“I don’t know the details of the house for my parents -- I know it was not intended to be their long-term property, it was intended to be the company’s property,” he said. Other purchases were made so employees who relocated to the Bahamas “had an easy way to find a comfortable life that they’d be willing to move and help build out the product.”

Bankman-Fried became one of the world’s wealthiest people in just a few years after starting Alameda and then FTX, which had more than 1 million customers globally before its collapse. He won backing for his exchange from hedge funds and venture capitalists, while Alameda posted trading profits that he said he would use to sway politics and support nonprofits that align with his “effective altruism” philosophy.

Then it all came crashing down. As he told it, his swift demise began in early November when crypto news site CoinDesk reported on Alameda’s balance sheet, showing that a token issued by FTX, FTT, made up about a quarter of the trading house’s $14.6 billion in assets.

In just about a week, his empire spiraled into bankruptcy, wiping out his fortune, which at the time was about $16 billion.

The Bloomberg Billionaires Index initially dropped the value of Bankman-Fried’s stakes in FTX and Alameda to zero once he agreed to a takeover offer from Changpeng Zhao’s Binance.

The index also removed his Robinhood Markets Inc. stake -- one of his last remaining assets of value -- from the wealth calculation after reports that it was held through Alameda and may have been used as collateral for loans.

It’s all but impossible to verify whether Bankman-Fried is telling the truth, and the Bloomberg index may not have tracked all of his assets. A report in November said he had more than $500 million with venture capital firms including Sequoia and was an investor in media startup Semafor. But if those assets were held through Alameda, they might have been wiped out by its losses.

“I’ve had a bad month. This has not been a fun month for me,” Bankman-Fried said on Wednesday. “There’s going to be a time and a place for me to think about myself and my own future. But I don’t think this is it.”