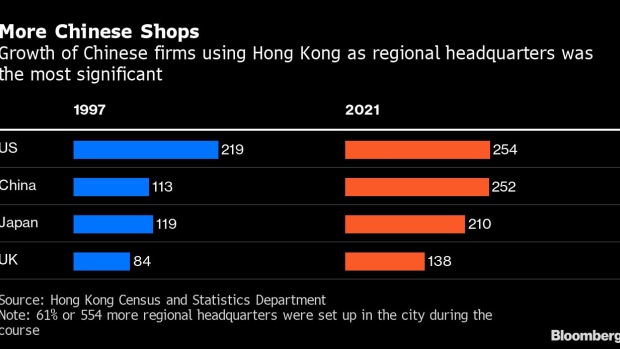 (Bloomberg) -- Half way to the point when Hong Kong will officially be enveloped by China, Beijing is not just calling the shots politically, but in vast swathes of the city’s $344 billion economy.

From the stock exchange to brokerages, construction projects to the retail sector, Chinese state-controlled firms are increasingly dominating, taking market share away from the local tycoons and British trading houses that thrived under the final decades of UK rule.

Those behind the growing Chinese influence view Hong Kong’s economy as stagnant, slow to embrace the technology-driven, new economy industries that have been catalysts for growth on the mainland. Chinese enterprises have been handed more political power in the city, including a recent revamp of the electoral system that reduced the influence of local businesspeople and added greater representation for state-backed companies.

“Hong Kong has come to a crucial crossroads,” said Simon Lee, a Hong Kong lawmaker and Greater Bay Area chief strategist for China Resources Group, a state-owned conglomerate. “With all these challenges, we need to make sure different voices are included in our policy making and mainland Chinese enterprises need to take greater responsibility in our society, economy and politics.”

While the mainland economy now faces its own host of challenges, and substantial political resistance to Beijing’s overpowering influence remains -- especially among local youth who don’t identify as Chinese -- the mainland-ization of Hong Kong’s business life increasingly looks irreversible.

We take a look at how it’s playing out, sector by sector:

Back in 1997, local brokers such as Peregrine and Somerley Capital, along with foreign banks including Morgan Stanley ruled the city’s finance industry. Fast forward to this year, and China International Capital Corp., China Merchants Bank Co. and Citic Securities Co. dominate listings. Almost 100 local brokers have closed over the past four years, battered by competition.

But more worrying for Hong Kong’s status as a gateway to China is that Chinese firms are choosing to raise capital at home, rather than in the city. Shanghai and Shenzhen have seen $37 billion in initial public offerings this year, compared with just $2.4 billion in Hong Kong.

In 1993, Tsingtao Brewery Co. became the first Chinese company to list in Hong Kong, and by 1999 that number had grown to 44, according to the Hong Kong Exchanges & Clearing Ltd. Now the city’s exchange hosts 1,370 mainland firms, accounting for almost 80% of the market’s value.

Chinese firms are catching up to foreign firms in terms of placing their regional headquarters in Hong Kong, more than doubling since 1997. Foreign businesses have also been clamoring for the city to relax its strict quarantine rules imposed over the past three years. In March, a survey by the European Chamber of Commerce showed a quarter of European companies in Hong Kong plan to fully relocate operations out of the city.

China Mobile Ltd., the mainland’s largest mobile operator, has become a dominant force in Hong Kong since it entered the market in 2006 after acquiring the fourth-largest wireless carrier. Today, the company has the biggest share of commercial mobile airwaves, beating three other competitors controlled by CK Hutchison Holdings Ltd., billionaire Richard Li and Sun Hung Kai Properties Ltd.’s Kwok family. China Mobile is leading in the next generation 5G, holding the largest share of the spectrum along with Li’s HKT Trust & HKT Ltd.

Their dominance was even more pronounced for the largest projects. For example, they took 68% of the HK$53 billion construction of the local part of the Hong Kong-Zhuhai-Macao Bridge, including a 12-kilometer (7.46 mile) highway and building an artificial island off the city’s airport. All of Hong Kong’s makeshift hospitals and most of its quarantine facilities for Covid-19 control were also built by state-owned construction companies.

Chinese developers also aggressively snapped land in the middle of the last decade, although the buying spree has lost some of its steam in recent years amid pressure from Beijing to deleverage. One of the biggest buyers was HNA Group Co., which acquired several residential sites in the Kai Tak area in record-breaking deals, only to dispose of them due to debt issues.

On the construction side, state-owned firms such as China State Construction International Holdings Ltd. and China Communications Construction Co. expanded their market share in Hong Kong thanks to their massive capital. This allowed them to offer attractively low prices to the government on builds, said Derrick Pang, chief executive officer of Asia Allied Infrastructure Holdings Ltd., a local construction firm. Homegrown developers often need to rely on bank loans, making them less competitive. And losing past projects also means local companies now lack a good track record, putting them at even more of a disadvantage, Pang said.

“If we don’t have more Hong Kong companies rising to the top, what happens is they will gradually disappear,” Pang said. “Whether this happens in five years, 10 years or 20 years -- it’s just a matter of time. And it will be a similar story in other Hong Kong sectors, not just the construction industry.”

Mainland firms have also been buying up prime office space. In 2017, they occupied almost half of the Central business district’s office space, according to Jones Lang LaSalle Inc. But there has been a slide in demand in recent years, leaving large chunks of empty office space as foreign firms also cut back amid sky-high rents and the chilling effect of the city’s strict pandemic measures.

For decades, Hong Kong’s retail scene had been ruled by homegrown tycoons. The two dominant supermarket chains are owned by CK Hutchison, the flagship of billionaire Li Ka-shing’s empire, as well as Jardine Matheson Holdings Ltd. Their growth has stagnated in recent years as groups backed by mainland Chinese capital are catching up.

Jardine’s Wellcome supermarket has grown just 2% since 2017 while CK Hutchison’s ParknShop has shrunk 17%. U Select, owned by China Resources, expanded 39%, according to data from Euromonitor International and Bloomberg News. Qiandama, a mainland grocery chain backed by JD.com Inc., entered Hong Kong in mid-2018 and has since opened 50 shops.

China Resources is also Hong Kong’s largest food distributor and sole importer of fresh pork, beef and poultry from the mainland. The city relies on the mainland for more than 90% of its fresh pork supply.

Beijing has been open about its desire to increase its influence in Hong Kong, especially after the unrest in 2019 strained its trust with the local tycoons. Mainland Chinese enterprises should provide for Hong Kong’s livelihood and promote its integration into the nation’s overall development, Yin Zonghua, deputy director of China’s liaison office in Hong Kong, said at an event in December 2021.

Still, there’s one crucial part of the city that is becoming less Chinese: the public.

A survey released last week showed only 29% of residents identified as broadly “Chinese,” down from above 40% just after the handover, according to a poll by the Hong Kong Public Opinion Research Institute. Some 70% identified as Hong Kongers, up from about 60% 25 years ago.

But the survey showed some good news for officials eager to tie Hong Kong closer to the mainland, the residents identifying as “Chinese” has rebounded from a low in 2020.