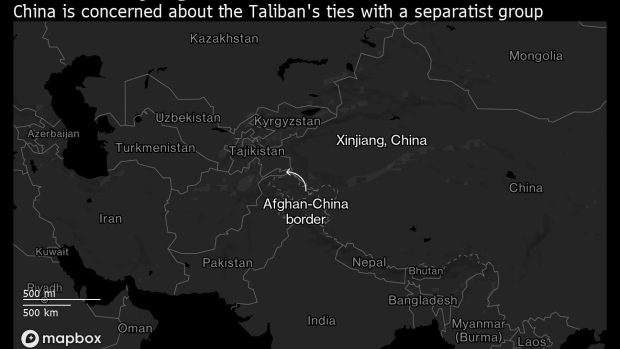 (Bloomberg) -- The US withdrawal from Afghanistan after two decades of war opened up an opportunity for China to expand its influence and lock down access to the country’s vast mineral deposits.

It hasn’t worked out that way.

More than a year after US troops left, Afghanistan’s economy is collapsing, 19 million people are at risk of acute hunger and the investment the Taliban were counting on from Beijing hasn’t arrived. Both sides blame the other.

“There has not even been a penny of investment by China,” Khan Jan Alokozay, vice president of Afghanistan’s Chamber of Commerce and Investment, said in an interview. “Many of their companies came, met with us, conducted research and then left and vanished, which is frustrating.”

From China’s perspective, the Taliban haven’t shown they are doing enough to crack down on a group that has ties to separatists in its far western Xinjiang region, according to two people familiar with the issue. What’s more, the people said, the Taliban are also seeking to renegotiate the terms of existing projects to tap Afghanistan’s resources.

While the Taliban has vowed not to allow terror groups to operate on Afghan soil, China on multiple occasions has implored the group to take action against the East Turkistan Islamic Movement, or ETIM, a Muslim separatist group seeking to establish an Islamic state overlapping with China’s vast Xinjiang region. China and Afghanistan share a 76-kilometer (47 mile) border.

The Taliban have repeatedly said ETIM isn’t operating in Afghanistan and that they “won’t allow anyone to use Afghan soil against any other country,” according to Suhail Shaheen, the head of the Taliban’s political office in Doha. But a UN report in May cites several nations saying ETIM remains a presence in Afghanistan.

Support for any group stoking tensions in Xinjiang is a red line for Beijing, which has been accused by the US and other nations of “genocide” for pressing the region’s largely Muslim Uyghur population into forced labor camps after a spate of unrest more than a decade ago. China rejects those charges and says critics are trying to meddle in its domestic affairs.

China Eyes $1 Trillion of Minerals With Risky Bet on Taliban

“The ETIM is certainly a ticking time bomb for China, which makes it a long-term threat,” said Faran Jeffery, deputy director at Islamic Theology of Counter Terrorism, a UK-based think tank known as ITCT.

Zhao Lijian, a Chinese foreign ministry spokesperson, directed questions about the Taliban’s ties to ETIM to officials in Kabul, but added, “according to our communication with the Afghan Taliban, the Taliban side said on multiple occasions that they will not allow their territory to be used by any terrorist forces to attack countries, including China.”

The dream of mining riches in Afghanistan dates back centuries. After the US withdrawal, China signaled it would help make it happen -- both by activating earlier joint ventures that had stalled and breaking ground on new projects. With many nations pausing support for Afghanistan to see how the Taliban would rule, China was one of the few countries to promise the new regime an economic lifeline.

China “is ready to step into the void left by the hasty US retreat to seize a golden opportunity,” Zhou Bo, a military strategist and former colonel in the People’s Liberation Army, wrote in the New York Times just days before American forces left last year. He cited access to Afghanistan’s mineral wealth as a key benefit of enhanced ties.

To facilitate those ties, Chinese Foreign Minister Wang Yi met repeatedly with Taliban representatives before and after the US exit. In March he made a rare visit to Kabul for talks with acting Foreign Minister Amir Khan Muttaqi. After praising the country’s leaders and hinting at support for Afghanistan’s participation in the belt and road infrastructure program, Wang’s statement afterward cut to the chase.

“China hopes that the Afghan side will earnestly fulfill its commitment and take effective measures to resolutely crack down on all terrorist forces, including the ETIM,” according to the statement.

But Beijing still isn’t convinced that’s happening, leaving billions in promised and future investments on hold. That includes a $3 billion deal with state-owned Metallurgical Corporation of China, which was awarded a contract in 2007 to mine a copper deposit in the Mes Aynak area for 30 years. The Taliban had expected to earn hundreds of millions of dollars per year from the long-stalled project.

Also, a project by China National Petroleum Corp. is either not fully operational or making little progress in extracting oil from the Amu Darya basin in northern Afghanistan after getting its contract from the previous government. Building a refinery was part of the deal that never came to fruition.

The Taliban’s ties with ETIM date back to the 1990s, when they ruled Afghanistan for five years before being ousted by the US following the Sept. 11, 2001, terrorist attacks.

“The Taliban see ETIM as their guests who have fought alongside the Taliban against US and NATO forces” the past two decades, said Jeffery, adding that such ties are proving difficult to turn their backs on.

A UN report in May -- citing comments by member states -- said the ETIM has expanded its “operational space” in Afghanistan by forming alliances with local Taliban commanders and “covertly” purchasing weapons, aiming to improve its capabilities for “terrorist activities.” Estimates of the group’s size vary widely, from a few dozen fighters to as many as 1,000, according to the report.

While the Taliban are trying to restrain the movement of ETIM militants in Afghanistan to satisfy China -- such as pressing them back from the border with Xinjiang -- they also “worry that if they come down too hard against ETIM, many of their members could end up defecting” to Islamic State, one of the Taliban’s biggest threats, said Jeffery of the ITCT.

How a Bloomberg Reporter’s Family Escaped the Taliban

The Taliban argument that they aren’t hosting terrorists was undercut further by the US strike last month on a safe house in downtown Kabul that killed al-Qaeda leader Ayman al-Zawahiri. Taliban officials said they weren’t aware that the man who helped organize the Sept. 11 and USS Cole attacks was living in Afghanistan’s capital.

Also frustrating Beijing is that the Taliban want to renegotiate the terms of some of the previously-reached investments, including raising the royalty rate for copper mining at the Mes Aynak site. China has previously sought to lower the 19.5% rate.

A spokesman for Afghanistan’s Ministry of Mines and Petroleum, Mufti Esmatullah Burhan, downplayed any security risk to China, saying the Taliban have tightened control throughout the country and that a “suitable business environment” has emerged for China and other countries to “leverage” the country’s resources.

That hasn’t been enough to persuade Beijing.

For now, the continuing standoff means that Afghanistan’s mineral treasures -- including deposits of gold, copper and lithium -- will remain underground even longer. By some estimates, the assets could be worth more than $1 trillion -- but only if they can be mined.

Experts who follow the country say that after two decades of warfare, the Taliban haven’t managed to transition from insurgents to rulers. The government is run largely based on orders from spiritual leader Haibatullah Akhundzada, who rules from the Taliban birthplace in the Kandahar region bordering Pakistan.

All of that is also giving China pause, said Raffaello Pantucci, a senior associate fellow at the Royal United Services Institute in the UK.

It is difficult for China to move companies to a country ruled by people with “very little managerial experience, very little sort of capability to deliver what you need on the local government side,” Pantucci said.