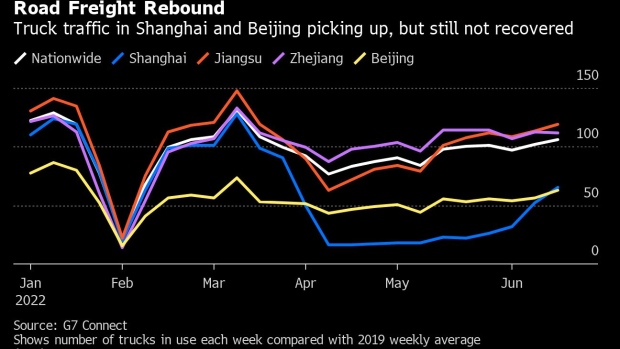 (Bloomberg) -- China’s economy showed some improvement in June as Covid restrictions were gradually eased, although the recovery remains muted.

That’s the outlook based on Bloomberg’s aggregate index of eight early indicators for this month. The overall gauge returned to the neutral level after deteriorating for two straight months.

Economic activity picked up in June after financial hub Shanghai lifted its lockdown, allowing businesses to restart and most residents to leave their homes. That can be seen in a rebound in small business confidence, which started growing again after contracting for two months.

A survey of more than 500 smaller firms showed that “demand and production recovered strongly among manufacturing,” and export-oriented smaller firms outperformed, according to Hunter Chan and Ding Shuang, economists at Standard Chartered Plc.

However, “the manufacturing recovery was more significant than services,” they said. Contact-intensive industries such as retail and catering continued to be a drag, while real estate, transport and information technology reported an acceleration in activity and construction jumped.

Rising activity isn’t translating into higher demand for some building materials yet. More steel plants have been idled and inventory levels at major Chinese steel mills have climbed 10.7% in mid-June from earlier in the month, and are about 82% higher than the start of this year. Stocks of steel rebar, which is used in construction, rose slightly in June.

Beijing has pledged to boost policy measures to support growth, with President Xi Jinping saying last week China would strive to meet its goals for the year. Stocks were up for a fourth week on optimism of stimulus and as lockdowns ended, with foreign inflows rising.

However, the housing sector continued to be a drag on the economy. Property sales declined in the first three weeks of June in the top four cities in China, even though sales in Shanghai last week had mostly recovered to the level before the lockdown.

An official index that tracks apartment and home sales has now declined for 11 straight months -- a record since China created a private property market in the 1990s. The slump likely continued into June, with weekly sales in the top 50 cities contracting from the level last year.

Read more: China’s Property Slump Is a Bigger Threat Than Its Lockdowns

The car market is making a gradually recovery after the lockdowns. Based on sales in the first two weeks of this month, more cars were sold in June than the same period in 2021. Sales fell in the past three months as Covid restrictions caused car plants and dealerships to shut and also prevented people across the country from leaving their homes to go shopping.

Total retail sales also dropped in that period, with the economies of Beijing and Shanghai the worst hit.

The recovery in the services industry will likely take longer than for goods. Consumers are still unwilling or unable to go out as much as before since China’s strict Covid Zero policy means they face being quarantined for weeks if they’ve been in the same location as a positive case.

The restrictions and factory closures of the past months have also curbed the incomes of many businesses and workers, even if they weren’t locked down.

Read more: Even Without a Lockdown, Beijing’s Economy Struggled in May

The export sector likely supported demand in June, as companies ramped up shipments that had been delayed and ports worked to clear the backlog of containers. Although South Korean exports in the first 20 days of the month fell for the first time in more than a year, that was largely because of fewer working days this year than last.

The daily average value of Korean shipments rose 11% in the period from the same time in 2021. Exports have been a strong driver for China’s economy and the strong growth continues to defy predictions that they would slow markedly or start to fall.

The outlook for those shipments in the rest of this year depends on whether rising concerns about a global recession are correct or not. The price of copper had its steepest weekly loss in a year last week as global recession fears mounted, damping the outlook for demand and battering commodities from oil to metals. The metal used in wires and cables extended its weekly loss to 7%, with prices hitting the lowest level since February last year following disappointing US business activity data that included an abrupt cooling in manufacturing.

Bloomberg Economics generates the overall activity reading by aggregating a three-month weighted average of the monthly changes of eight indicators, which are based on business surveys or market prices.