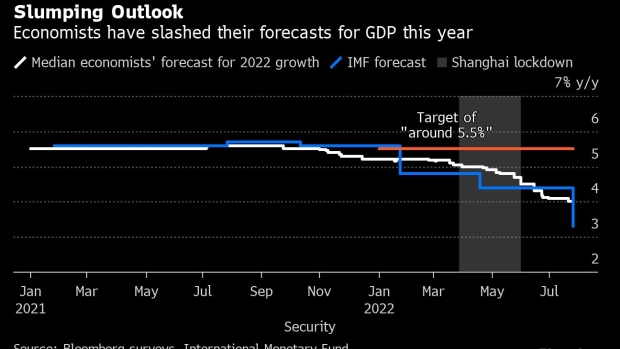 Residents queue at a Covid-19 testing booth in Beijing, China, on Wednesday, Aug. 10, 2022. The UK and China have agreed to resume direct passenger flights, a sign that Chinese authorities are slowly loosening their grip on the world’s tightest Covid-19 regime and opening up to travel again. , Bloomberg

(Bloomberg) -- China will likely report a further recovery in its economy in July although the strength and longevity of that rebound is far from certain as Covid outbreaks continue to spread and a property slump shows no sign of easing.

Official data on Monday will probably show a raft of key indicators -- including industrial output and retail sales -- improved last month as business and consumer activity gradually picked up from the worst of the Covid lockdowns in the second quarter. The government will publish the data at 10am local time on Monday.

The economic picture might be mixed, though, as property investment probably slowed, and the unemployment rate likely remained elevated. Independent high-frequency data have also painted a more negative picture of the economy’s outlook, with truck flows -- a proxy for economic output -- significantly lower in July than at the same time last year and home sales last month plunging from a year earlier.

With policy makers signaling a “wait-and-see” attitude toward more stimulus and inflation creeping up, the data for July will offer important clues on the policy direction for the rest of the year.

Here’s what to look for on Monday:

Retail sales probably grew 5% in July from a year ago, according to the median estimate in a Bloomberg survey of economists, up from 3.1% in June as Covid controls were relaxed.

Automobile sales were also boosted last month because of favorable policies, such as subsidies and tax cuts, rolled out this year to entice buyers. Spending on transportation and hotels may have picked up because of seasonal demand for summer vacations.

The rebound could be short-lived though as Covid outbreaks in popular tourism destinations in August put a brake on spending and travel. Authorities recently shut down parts of Tibet’s capital and left thousands of tourists stuck on the tropical island of Hainan to contain infections.

Although Hainan’s economy accounted for just 0.6% of China’s GDP and 0.5% of retail sales in 2021, the flareup will probably fuel concerns about the risks involved in traveling -- damping tourism more widely and hurting consumption sentiment, Bloomberg Economics wrote in a note.

Growth in fixed asset investment likely held up in July as policy makers pushed for an acceleration in the construction of major infrastructure projects. Economists forecast an increase of 6.3% in the seven months through July, little changed to 6.1% in the first half of the year. Manufacturing investment also likely got a boost from strong export demand, along with improving profitability due to a moderation in price pressures.

The recovery momentum in the industrial sector likely stayed intact: Industrial output is estimated to have grown 4.4% in July, survey results showed, up from 3.9% in the previous month.

Jobs figures are gaining increasing attention as top leaders downplay the country’s gross domestic product growth target of “around 5.5%,” in favor of attaching greater significance to stability in employment and prices.

Investors should also be looking under the hood for signs of any improvement in the jobs rates for the most vulnerable groups. Summer months usually see a seasonal spike in unemployment as graduates enter the job market.

The pressure is especially great this year with the number of students graduating hitting a record 10.76 million. The frequent Covid outbreaks also bode ill for migrant workers, as authorities might shut down construction sites and restaurants once there’s a flareup.

The People’s Bank of China will have an opportunity to drain funds from the banking system through policy loan operations on Monday, which would help rein in risks created by excessive liquidity.

Eight out of 12 analysts polled by Bloomberg forecast the PBOC will roll over only part of the 600 billion yuan ($88.8 billion) of maturing one-year medium-term lending facility, with the median estimate at 400 billion yuan. That would be the first monthly drainage since December 2021.

The interest rate for the MLF will likely remain unchanged at 2.85%, according to the consensus estimate, as rising inflation risks restricts the room for further monetary easing.

Cash has been piling up in the market for the past few months, and has struggled to turn into loans that benefit the real economy. Seven-day interbank borrowing costs have slumped to a two-year low and are far below the short-term policy rate. The increase in leveraged bond trading may lead to financial risks should liquidity start to tighten, a former PBOC official warned.