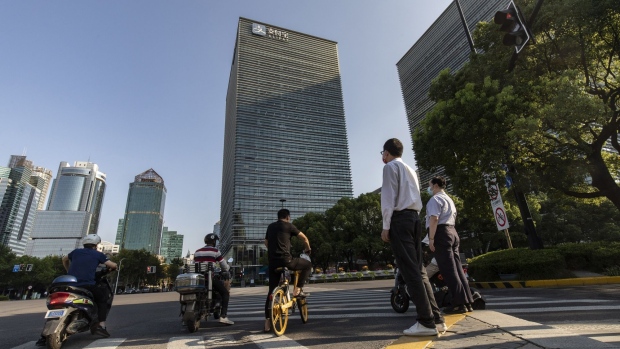 (Bloomberg) -- China’s low interest rates are failing to spur lending in the economy, creating a challenge for policy makers as they try to bolster the nation’s fragile recovery.

At the same time, growth of M2, the broadest measure of money supply, accelerated more than expected to 12% in July. Taken together, the data shows banks are flush with cash but are struggling to boost lending to customers against the backdrop of weak growth and turmoil in the property market.

The data is a “classic sign of a liquidity trap,” said Craig Botham, chief China economist at Pantheon Macroeconomics Ltd. “Liquidity is ample, but no one wants it.” Under these circumstances, “monetary policy can do little to support the economy,” he said.

The People’s Bank of China has refrained from cutting policy interest rates since lowering them in January and has focused instead on persuading banks to boost their lending, especially to targeted sectors like small businesses. However, defaults in the property sector and a weakening economy have made banks reluctant to lend.

More recently, Beijing has placed its hopes on policy banks to spur growth, allocating 1.1 trillion yuan ($163 billion) to use to finance infrastructure projects.

The mismatch between liquidity and bank lending is also raising financial risks as market interest rates drop well below policy rates set by the central bank.

“Liquidity is piling up in the interbank market and there’s even a risk of money being directed out of the real economy and into markets,” said Ming Ming, chief economist at Citic Securities Co. “Monetary policy needs to better monitor the changes in market leverage and push for the money to flow into the real economy.”

The central bank may be ready to curb some of the excess liquidity sloshing in the banking system Monday through its medium-term lending facility operation. Eight out of 12 economists and analysts polled by Bloomberg forecast it will withdraw cash through the MLF for the first time this year.

The surprisingly sharp retreat in China’s credit in July should put policy makers on alert -- aggregate social financing slumped to its lowest level since 2017. Even taking into account a usual seasonal lull in July, the data were extremely weak. Damaged confidence hit demand for credit and willingness of banks to extend loans. Property turmoil and Covid-Zero curbs are taking a heavy toll on the economy. The recovery in the second half of the year will be rough going.

Bill financing, a form of short-term corporate borrowing, jumped in July, according to Friday’s report. The funding is widely used by banks to boost the scale of loans and meet regulatory requirements in times of weak borrowing demand.

“The credit growth is particularly weak compared to last year,” said Zhang Zhiwei, chief economist at Pinpoint Asset Management Ltd. “It reflects domestic demand is still quite weak” due to ongoing Covid outbreaks and poor sentiment in the property market, he said.