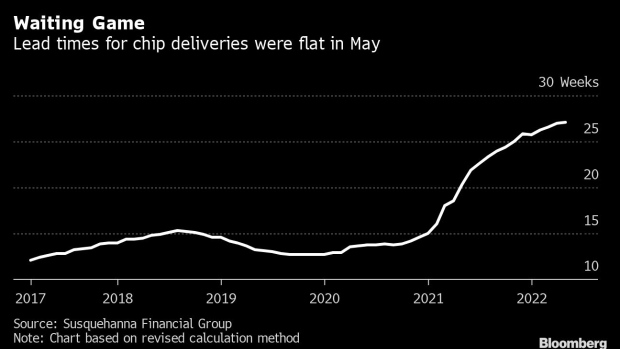 (Bloomberg) -- The global semiconductor shortage that’s bogged down the auto industry for almost two years is showing signs of easing, at least for now.

Mercedes Benz AG, Daimler Truck Holding AG, and BMW AG are among carmakers now getting enough of the high-tech components to produce at full capacity after experiencing crippling outages for months.

The breakthrough comes earlier than the companies predicted and marks a bright spot for an industry facing a deteriorating economy and inflation while managing an historic transition to electric-vehicle production. Manufacturers are cheering the chip-supply improvement but aren’t declaring victory yet.

“We’re still monitoring it week to week, but up to now basically worldwide, we had no issues running production,” said Joerg Burzer, Mercedes’s head of production and supply-chain management. Supply issues occur “here and there,” he said, “but nothing compared to what it was like last year.”

Even as demand for cars boomed, auto manufacturers have had to curtail output as plants globally couldn’t source enough chips critical for increasingly computerized vehicles. The outages have been so severe that global passenger car output has barely shown signs of recovery to pre-pandemic levels.

As the chip supply improves, carmakers are working down their order backlogs, and concerns are turning to how consumer demand will hold up amid accelerating inflation and higher interest rates. Tesla Inc. Chief Executive Officer Elon Musk said the electric-car maker needs to cut staff by 10% and that he has a “super bad feeling” about the economy, according to Reuters, which cited an internal memo.

But not everyone is as pessimistic as Musk. German carmakers’ sentiment improved significantly in May, according to an Ifo Institute survey. The survey showed growing confidence among the carmakers that they’ll be able to raise prices to cope with soaring raw material costs.

Some of the new availability of chips stems from the weakening economic outlook and inflation, which has cut into demand for consumer electronics that also use the components. Karin Radstrom, head of the Daimler Truck’s Mercedes brand, said the company is now getting the chips it needs to work down a backlog of orders.

“It’s not perfect, but it’s better than last year,” Radstrom said in an interview. “I try to not celebrate too early. We’re still monitoring the situation closely.”

BMW expressed similar reserved optimism, saying all plants are up and running and the company isn’t experiencing any stoppages due to chip supplies.

“Currently, the situation is a little bit more stable,” a spokesman said, adding that BMW still monitors the chip supply on a daily basis and doesn’t rule out the possibility of fresh disruptions in the coming weeks and months.

Volkswagen AG, which like others estimated that the logjam would begin to ease in the second half of 2022, is also seeing steady supplies, according to a spokesperson, who underscored that there’s still significant uncertainty about the coming months.

“We’ve seen better supply of components than we maybe anticipated five, six weeks ago,” Wolters said. “So in the U.S. and Europe, we’ve been able to increase build rates.”

But not all companies are enjoying the same relief. Volvo Trucks said it’s still seeing limited chip availability and expects an impact on second-quarter production. And according to to research by Susquehanna Financial Group, delivery times for chips -- used in a range of electronics -- remained flat in May, a sign that lags persist.