Dramatic oversupply of SPACs, but we're bullish on the market: Accelerate CEO

The mania around special purpose acquisition companies is fizzling, but ETF issuers are still trying to cash in.

Two firms this week have filed to launch exchange-traded funds based around so-called blank-check companies, which have soared in popularity during the past year as a speculative bet on future superstar stocks. At the peak, five SPACs were launching each day, accounting for half of the record sum raised by initial public offerings in the first quarter.

That zeal has faded in the face of sharp SPAC selloffs in recent months, as rising Treasury yields pressure the long-term earnings prospects of such growth plays and investors rotate into value and cyclical names. SPAC offerings are on track for their slowest two-week period since the end of 2020 and current ETFs tracking the space have each plunged more than 10 per cent from their highs.

Still, new funds keep coming down the pipeline. Robinson Capital Management is planning the Robinson Active Premerger SPAC ETF, ticker SPAX, an actively-managed fund which would invest primarily in U.S.-listed SPACs with a minimum market cap of US$100 million.

The Cowen SPAC ETF by Cowen Prime Advisors plans to offer a similar strategy and is also actively-managed.

“Interest will grow,” said Mohit Bajaj, director of ETFs for WallachBeth. “The market in general has been volatile all year, so it is no surprise to see a pullback in some of the niche ETFs, but the space will continue to grow as new issues do come out.” 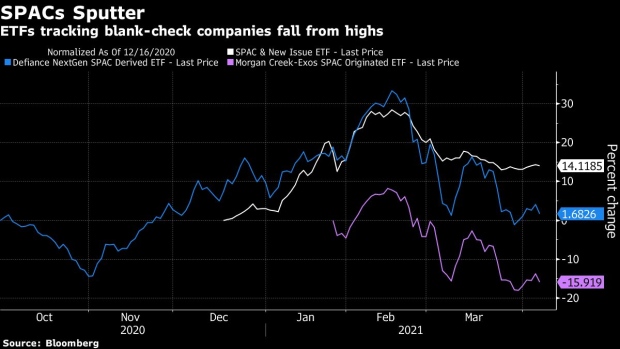 SPAK and SPXZ have each dropped more than 20 per cent from their February peaks, while SPCX is down 11 per cent in the same period.

Tuttle Tactical Management -- the firm behind SPCX -- is also planning a De-SPAC fund that would track the 25 largest companies that have merged with SPACs, as well as an inverse of that product.