Bitcoin rebounded from a swoon below US$30,000 as a selloff in stocks eased and a bout of calm washed across global markets.

The world’s largest digital token snapped a five-day slide that had cut its price by more than 20 per cent. Bitcoin added as much as 5.4 per cent on Tuesday before giving up some gains and trading at around US$31,623 as of 2:35 p.m in New York. Ether at one point climbed 7.2 per cent, while coins like Solana and Avalanche were also in the green. The crypto recovery came as equities mostly advanced across the U.S. and Europe, highlighting how the two asset classes are trading in tandem.

The TerraUSD algorithmic stablecoin continued to trade below US$1 after de-pegging from the dollar over the weekend, adding to the market volatility.

“The main reasons as to why Bitcoin would continue to struggle are rooted in both the equities market as well as the LUNA foundation,” said Nick Mancini, director of research at crypto sentiment analytics platform Trade The Chain.

Bitcoin’s recent plunge has taken it to levels last seen in the middle of 2021, reversing a bull market that peaked in November. Whether the calm will last is an open question. Tightening monetary policy to combat runaway inflation is curbing liquidity, creating a formidable obstacle for speculative assets like cryptocurrencies.

Michael Novogratz, the billionaire cryptocurrency investor who leads Galaxy Digital Holdings Ltd., warned that he expects things to get worse before they get better. Among challenges facing digital assets is that they’re increasingly trading in line with technology stocks, which are getting hammered by rising interest rates.

“Crypto probably trades correlated to the Nasdaq until we hit a new equilibrium,” Novogratz said on Galaxy’s first-quarter earnings call on Monday, adding that investors may see “a very choppy, volatile and difficult market for at least the next few quarters before people are getting some sense that we’re at an equilibrium.”

Issuers of conventional stablecoins like Tether’s USDT or Circle’s USDC maintain that their tokens are backed by “real” assets like cash or highly rated bonds on a 1-to-1 basis. These coins hold their peg because, the theory goes, they can be readily exchanged for cash or highly liquid cash equivalents. By contrast, algorithmic stablecoins attempt to hold their value through a combination of instructions encoded in software programs and active treasury management. UST -- which functions in tandem with a related token, Luna -- is the most popular and controversial of these kinds of tokens.

In the case of Terra’s stablecoin, if its price falls below US$1, traders are incentivized to swap units of UST for Luna, which removes the former from circulation. Similarly, software programs are triggered to do the same. If the price rallies above US$1, the mechanism applies in reverse - remove Luna tokens from circulation to create equivalent, new units of UST. But over the weekend, all of those mechanisms stopped working and UST lost its dollar peg, while Luna also slid in value.

Do Kwon, the founder of Terraform Labs, which powers the Terra blockchain, is moving to shore up the stablecoin. Luna Foundation Guard, the association created to support the decentralized token and Terra blockchain, said it will issue loans worth about US$1.5 billion in Bitcoin and TerraUSD to help strengthen TerraUSD’s peg. 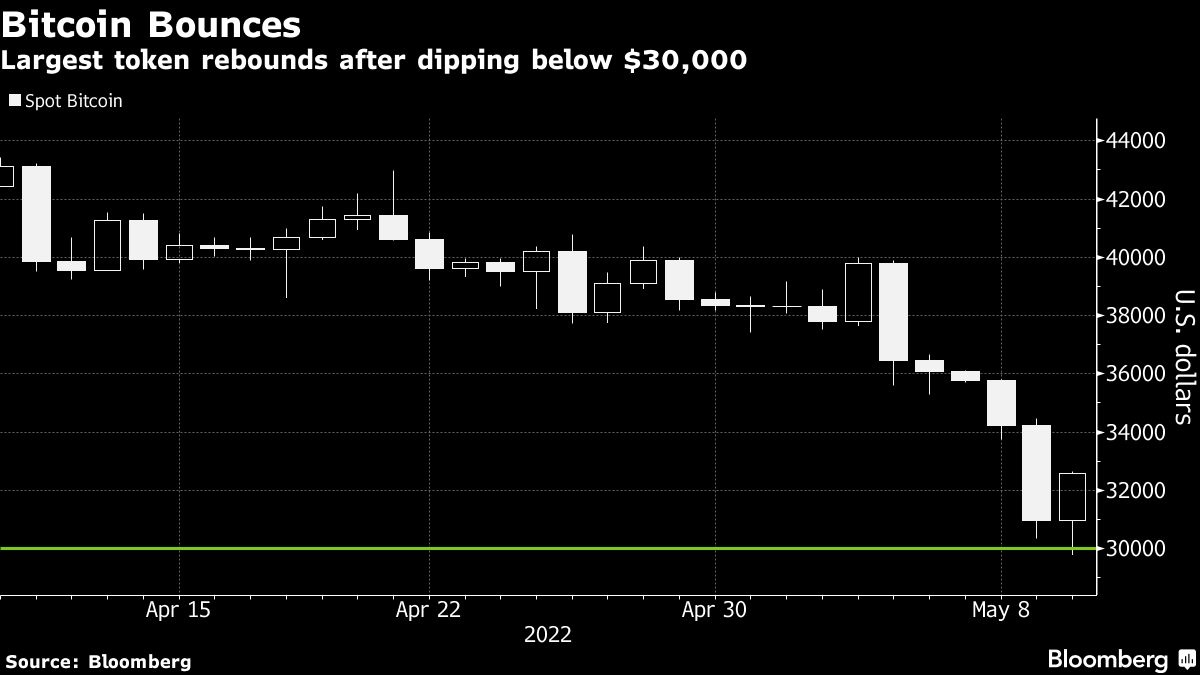 Bitcoin is down more than 50 per cent since hitting a record of almost US$69,000 in November and has underperformed both global stocks and gold so far in 2022. The recent rout also broke it out of the narrow trading range where the token has spent most of this year, prompting some technical analysts to predict more pain ahead. Short bets against Bitcoin have climbed to a record, according to data compiled by CoinShares going back to January 2020.

Jeffrey Halley, a senior market analyst at Oanda, said in a note that technical patterns suggest Bitcoin could slump to the US$17,000 area.

“That is a big call, and it does seem to be making a stand ahead of US$30,000.00” Halley wrote. “Realistically, it needs to reclaim US$37,000.00 to change the technical outlook and give the HODLers hope of a good night’s sleep.” 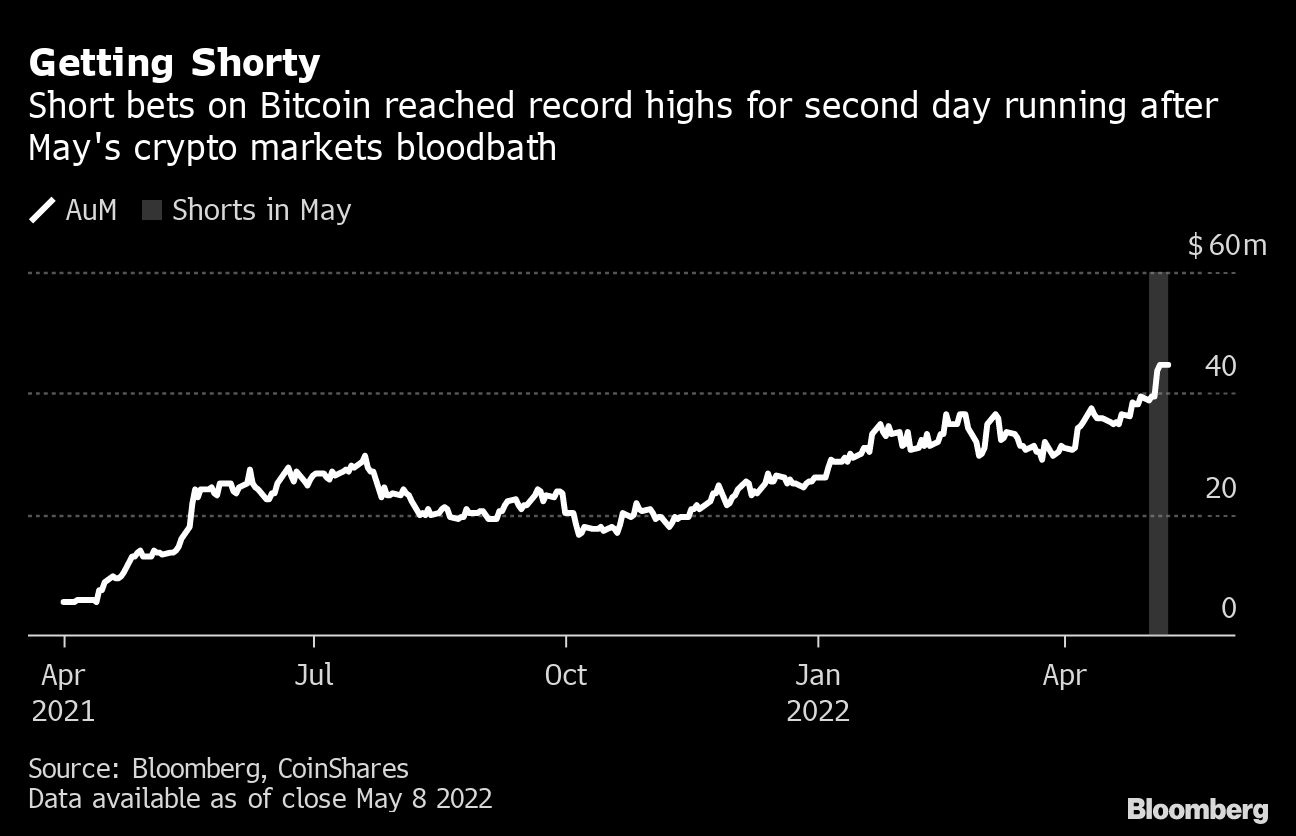 Over a 24-hour period, 254,956 traders were liquidated, with the total liquidations equaling about US$987 million, data from Coinglass show.