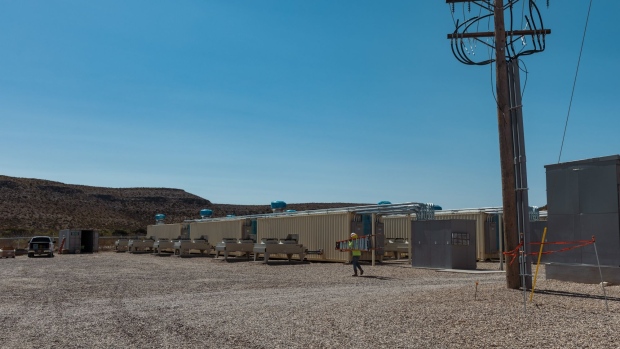 Engineers on a cherry picker adjust mining rigs at the CryptoUniverse cryptocurrency mining farm in Nadvoitsy, Russia, on Thursday, March 18, 2021. The rise of Bitcoin and other cryptocurrencies has prompted the greatest push yet among central banks to develop their own digital currencies. , Bloomberg

The total includes investments comprised of $10 million in convertible preferred stock of Compute North and $21.3 million related to an unsecured senior promissory note with the firm, according to a monthly report released by Marathon on Thursday. The miner has also paid approximately $50 million in operating deposits to Compute North entities for its hosting services.

More than 68,000 Bitcoin mining machines from Marathon were being installed and hosted by Compute North in its wind-powered Texas facility, according to the miner’s latest quarterly report. However, that facility faced delays for several months due to pending regulatory approvals and about 40,000 installed machines were waiting to be energized, the report said.

As a Bitcoin miner hosting company, Compute North helps miners connect their rigs to the power grid and houses them in data centers with hundreds of megawatts of hosting capacity. Compute North is one of the world’s largest crypto-mining infrastructure providers with facilities across the US, including Texas, Nebraska and South Dakota.

Compute North filed for Chapter 11 bankruptcy on Sept. 22 and is among the first major bankruptcies in the crypto-mining industry amid lower Bitcoin prices, soaring energy costs and fierce competition.

There’s only a limited number of newly minted tokens to be mined so companies use powerful computers to be the first to finish validating a certain amount of transaction data encrypted by the Bitcoin network.

Marathon takes an “asset-light” approach to expand its operations, meaning the miner relies on third-party data center companies like Compute North to host their rigs so it doesn’t have to make hefty investments in building up infrastructure. That is opposed to vertically integrated miners who construct sites themselves or even have their own power plants.

“While we expect operations to continue as originally anticipated, our asset light model provides us with the optionality to relocate our miners to other locations, should the need arise.” Marathon said in the monthly report.