MicroStrategy Inc., already well on its way to transforming from a software company into a Bitcoin repository, just sold junk bonds that give investors a novel way to put money into the cryptocurrency.

The question on Wall Street’s mind, though, is why there was so much demand for the debt when there are more straightforward and potentially more lucrative ways to invest if Bitcoin ever makes it “to the moon” -- like just buying Bitcoin itself.

Nevertheless, MicroStrategy had an easy time with its offering Tuesday, the first-ever junk deal to fund Bitcoin purchases. It originally planned to sell US$400 million, but had orders for all of that even before officially launching the transaction with a solid presence from hedge funds. It boosted the offering to US$500 million and locked in lower pricing.

Some of that demand came from investors who want Bitcoin exposure, but can’t buy the digital coins outright because of how their funds are structured, according to a person with direct knowledge of the offering, who asked not to be identified discussing private details. 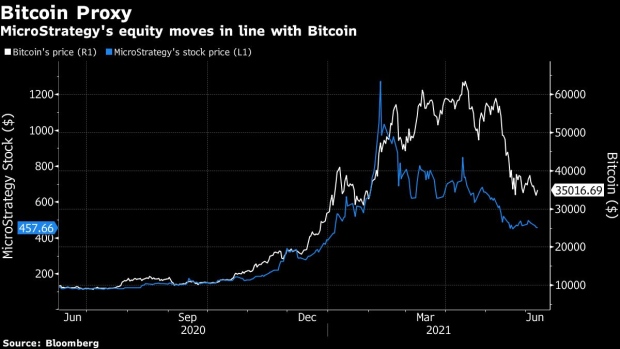 This isn’t as wild as it may seem. Investors for years yearned for access to crypto as prices skyrocketed, but Wall Street has not always made that easy as it struggled to figure out how to incorporate something so new into old investing frameworks.

Like ETFs, corporate debt is fair game for a wide range of institutional investors. So, for now, dipping a toe into Bitcoin can mean buying seven-year MicroStrategy debt yielding north of 6 per cent -- a pretty good return for a junk bond issued by a company with a credit profile like MicroStrategy, but nothing like what Bitcoin has historically delivered. Over the past seven years, Bitcoin has soared more than 5,500 per cent.

“A bond has a fixed return, so you’ll never get the upside of Bitcoin, the issuer will,” said Christopher White, chief executive officer of ViableMkts, a financial-services firm. For investors bullish on the cryptocurrency, “you might as well just buy the Bitcoin,” he said.

Buyers in the MicroStrategy deal were drawn to the downside protection inherent to secured bonds -- provided by the company’s positive cash flow and software intellectual property plus the Bitcoins that’ll be purchased -- even if they don’t have huge upside potential. Bitcoin has plunged since mid-April, losing almost half its value since then, putting the risk of losses in plain view.

Investors will get a 6.125 per cent coupon on the bond, which can’t be repaid early for the first three years. The new debt is guaranteed by the Bitcoin it’s intended to buy, but not by the company’s current Bitcoin hoard. MicroStrategy placed the existing 92,079 Bitcoins -- currently worth more than US$3 billion -- into a newly formed subsidiary called MacroStrategy LLC, according to a news release.

The new junk bonds could make sense for a traditional high-yield bond investor who believes in the fundamentals of the software business, and even a hedge of sorts for those already long on either Bitcoin or the company’s equity. Rated Ba3 by Moody’s Investors Service, three steps into junk, the deal offers a mark-up compared to the 3.22 per cent average yield for double-B rated bonds, according to Bloomberg Barclays index data, reflecting the added risk of being a Bitcoin proxy.

“In theory, you could underwrite this primarily by looking at the operating business, and potentially make a decision without much of a view on Bitcoin at all,” said Bill Zox, a high-yield bond portfolio manager at Diamond Hill Capital Management.

If Bitcoin falls too much, driving the equity below both conversion prices, the company could someday have to refinance both of these convertible notes with traditional debt. That would drive leverage up to roughly 19 times, based on US$2.2 billion in total debt and US$115 million of Ebitda, a key measure of profitability, according to an offering memorandum seen by Bloomberg. Such leverage is rarely seen outside of severely distressed situations.

If Bitcoin drops below US$6,000, S&P Global Ratings predicts that the company will need to do a distressed debt exchange before the convertible debt matures, according to a report published Wednesday afternoon.

With each bond offering, MicroStrategy opens its Bitcoin backdoor even wider for institutional investors.

“Bitcoin has arrived to Wall Street,” CEO Michael Saylor said in a phone interview. “My mission is to carve a channel between the US$400 trillion ocean of conventional assets and the US$1 trillion Bitcoin pond.”