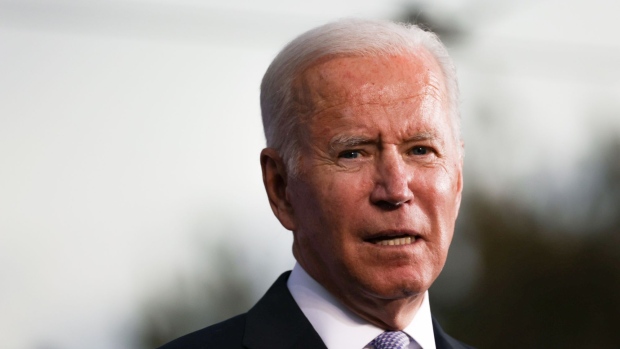 U.S. President Joe Biden speaks at the Electric City Trolley Museum in Scranton, Pennsylvania, U.S., on Wednesday, Oct. 20, 2021. Biden, trying to drum up public support for his economic agenda in Scranton, met with the leader of the Congressional Progressive Caucus on Monday as lawmakers returned for make-or-break negotiations over the president's infrastructure and social spending proposals. , Bloomberg

(Bloomberg) -- The White House’s concessions are piling up on President Joe Biden’s social-spending plan -- including climate, education and childcare provisions -- as negotiations continue into the weekend.

House Speaker Nancy Pelosi said Friday after breakfast with the president that “more than 90% is agreed to and written.”

But by the time it’s finished, the legislation will be far less ambitious than the president and progressive lawmakers had hoped, after its scope and price tag were winnowed at the behest of two Senate moderates, Joe Manchin and Kyrsten Sinema.

“Look, it’s all about compromise,” Biden said during a CNN town hall in Baltimore Thursday evening, adding that he’s confident he’ll get a deal. “‘Compromise’ has become a dirty word. But it’s bipartisanship and compromise still has to be possible.”

Meantime, Democrats plan to seek permission from the Senate parliamentarian to include a scaled-back immigration proposal shielding some undocumented immigrants from deportation and that may be included in the propsoal.

Here are policies that have been cut from the legislation or narrowed so far.

Biden ran on the promise of providing free community college to all Americans who want it, but that’s one of the latest provisions to fall out of the bill, Biden said Thursday.

Instead, he said the package may increase Pell grants for low-income college students by about $500.

“So, it’s not going to get us there. But I promise you, I guarantee you we’re going to get free community college in the next several years across the board,” Biden said.

Manchin, who represents the coal state of West Virginia and earns income from a coal brokerage he founded, insisted that the president drop a clean electricity program from the legislation -- one of its major provisions to fight climate change.

Biden said he’s discussing with Manchin the possibility of diverting the money to tax incentives or other provisions.

Negotiators are still weighing alternative policies that would ensure the U.S. reaches the president’s climate goals of net-zero emissions from electric power by 2035 and net-zero emissions overall by 2050. Manchin has said he would also oppose a carbon tax proposed by Senate Finance Chairman Ron Wyden of Oregon.

Biden’s proposal had included three months of federal paid parental leave. He said Thursday that he had to cut that provision to four weeks.

That’s a blow for progressives, who have long lamented that U.S. law doesn’t guarantee paid leave for new parents or other family reasons, unlike many

It is not clear if the package will expand Medicare, the health program for the elderly and disabled. It appears more likely that Congress will add a benefit for hearing aids, while dental and vision care may be dropped.

Manchin is opposed to expanding benefits for hearing aids, dental and vision care, and Sinema has voiced objections to certain expansions as well, Biden said.

The most expensive area would be dental insurance, and there’s a compromise on the table.

“Now, we’re talking about -- I don’t have a deal on it yet -- maybe getting an $800 voucher from Medicare for dental work that you may need,” Biden said.

Negotiations also continue on a proposal to allow Medicare to negotiate drug prices and for the government to force companies to offer the lower prices to private insurers.

There’s no consensus yet on how to deal with vision, he added.

Biden has said an expanded child tax credit could lift many American families out of poverty, and the pandemic relief law passed in March temporarily boosted the credit for children under six to $3,600, and to $3,000 for older kids.

The House has proposed extending the expanded credit through 2025, but lawmakers say Biden is now proposing an extension only through 2022.

Some progressives would prefer a shorter extension over adding a work requirement for the credit, a Manchin demand. They argue a potential future Republican Congress would find it politically impossible to end the benefit.

“Once something is in the tax code, it is very hard to get it out,” said Ways and Means Chairman Richard Neal.