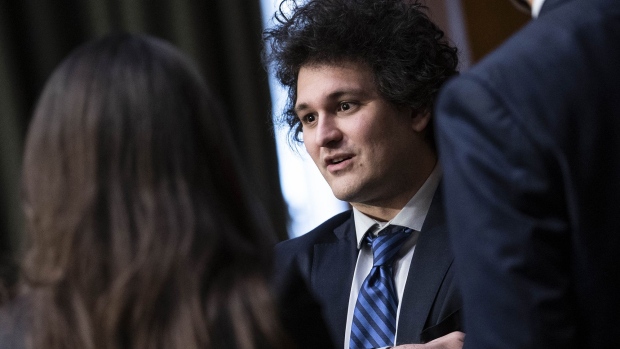 (Bloomberg) -- Sam Bankman-Fried’s FTX crypto exchange is exploring whether it might be able to acquire Robinhood Markets Inc., according to people with knowledge of the matter.

FTX is deliberating internally how to buy the app-based brokerage, one of the people said, asking not to be identified because the matter isn’t public. Robinhood hasn’t received a formal takeover approach from FTX, another person said. No final decision has been made and FTX could opt against pursuing a deal, the people said.

“We are excited about Robinhood’s business prospects and potential ways we could partner with them,” Bankman-Fried said Monday in an emailed statement. “That being said, there are no active M&A conversations with Robinhood.”

A spokesman for Menlo Park, California-based Robinhood declined to comment.

Robinhood’s co-founders, Chief Executive Officer Vlad Tenev and Chief Creative Officer Baiju Bhatt, control more than 50% of Robinhood’s voting power, according to a regulatory filing. In May, Bankman-Fried disclosed that a company he controls, Emergent Fidelity Technologies, bought a 7.6% stake in Robinhood.

Shares of Robinhood had lost about three-quarters of their value since the firm’s initial public offering last July, leaving it with a market capitalization of about $7.4 billion. The stock surged 12% to $8.96 at 2:59 p.m. in New York, triggering a trading pause, following Bloomberg’s report.

A deal would combine two companies that vaulted to prominence during a pandemic-fueled trading boom, only to struggle with sharp declines this year in equity and crypto markets. It would also mark the end of a period of dramatic transformation for Robinhood, a popular trading platform among fledgling investors, with 22.8 million accounts.

The brokerage popularized commission-free trading for people with modest account balances who piled into financial markets during the early days of Covid-19. Investor enthusiasm for meme stocks such as GameStop Corp. and digital tokens including Dogecoin fueled its ascent.

Read more: Robinhood’s Stock Is Now Worth Less Than Its Cash on Hand

Robinhood has struggled to maintain that momentum since the IPO, with active users and revenue plummeting. FTX, meanwhile, has been on the hunt for deals. It acquired Embed Financial Technologies earlier this month, giving one of the world’s biggest crypto exchanges a foothold in US stock trading and clearing. FTX announced it was beginning to roll out its own US equity-trading platform in May.

Bankman-Fried is one of the richest people in crypto, worth almost $10 billion, according to the Bloomberg Billionaires Index.