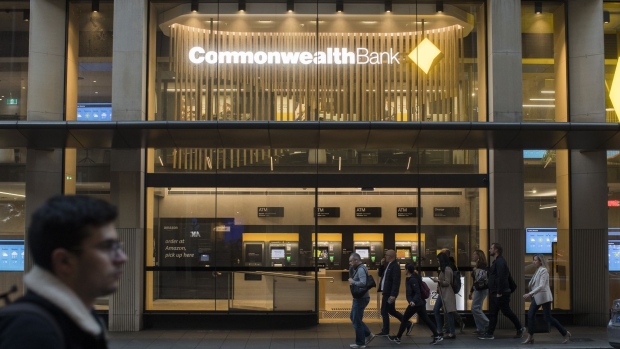 (Bloomberg) -- Commonwealth Bank of Australia, the country’s largest lender, posted an 11% jump in profit but warned that steeper borrowing costs and inflation were hitting consumer demand.

The Sydney-based bank warned of a challenging outlook as the twin economic pressures worsened the cost-of-living burden, when it reported full-year earnings Wednesday. It posted a cash profit of A$9.6 billion ($6.7 billion) for the year through June, which was slightly higher than analyst expectations.

“Against many measures, Australian households and businesses are in a strong position given low unemployment, low underemployment, and strong non-mining investment,” Chief Executive Officer Matt Comyn said in the statement. “However, inflation is high, and we have seen a rapid increase in the cash rate which is negatively impacting consumer confidence.”

Commonwealth Bank’s shares were down 1% at 10:22 a.m. in Sydney on Wednesday.

While Australia’s largest lenders have all passed on the Reserve Bank’s record series of interest rate hikes since May, they’re yet to show a significant rise in problem loans even after years of intense competition in the mortgage market. However, with the country’s debt-laden consumers now grappling with the fastest tightening cycle in a generation, sentiment has taken a cautious turn.

Commonwealth Bank also reported an 18 basis point drop in the closely-watched net interest margin -- which compares the bank’s deposit rate and what it charges to lend -- to 1.9%, citing a big increase in low-yielding liquid assets and lower home loan margins. The bank still expects those margins to increase as interest rates continue to rise.

“We expect strong margin gains from 1H23 as 175 basis points of RBA rate hikes take effect next to tight cost control and benign asset quality, but impairment costs seem set to rise. CBA’s reference to high inflation may be a warning of rising costs in fiscal 2023.”

The bank also boosted its dividend 10% on the prior year to A$3.85 per share, it said Wednesday.