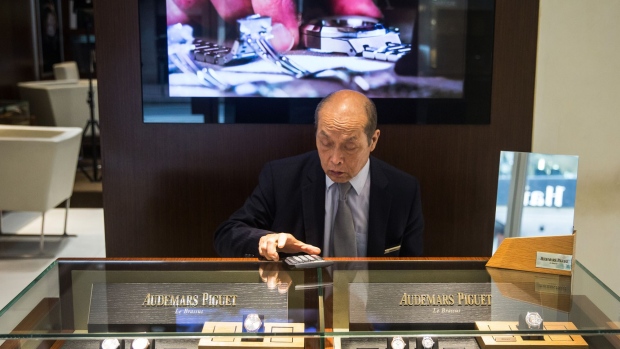 (Bloomberg) -- After a year of celebrating the 50th anniversary of the Royal Oak, its flagship timepiece, Audemars Piguet turns its attention to its relatively young Code 11.59 collection, now equipped with a splashy new wandering hours complication.

Code 11.59 by Audemars Piguet Starwheel displays time in an unusual way. Instead of using central hour and minute hands, it has a 120-degree minute scale at 12 o’clock and three discs for the hour. Each disc has four digits and an arrow on the white gold border and is mounted on a central rotor that makes a complete revolution in three hours. Thus, the disks “wander” around the dial. While the rotor moves, each disc rotates so the correct hour will align with the minute scale.

So how do you tell the time? The current hour travels in an arc along the minute scale, and the disk's arrow points to the minute. In the pictured image, it’s 10:22 because 10 o’clock is aligned with the minute scale, and the arrow points to 22. There’s also a somewhat confusing seconds scale around the black inner bezel that you read in the traditional way, with a long central seconds hand. In an interview shortly after the launch of the timepiece, AP’s CEO, François-Henry Bennahmias, said they added the seconds hand to indicate that the watch was automatic, unlike the original Starwheel, which was manual-winding.

Despite its futuristic appearance, wandering hours is actually a horological invention that dates to the 17th century. It was created by Roman clockmakers at the request of an insomniac pope. (Seriously.) Pope Alexander VII could not stand the sound of his clock ticking as he lay awake at night, so he challenged Umbria-based clockmakers the Campani brothers to design a silent version he could read in the dark.

Their solution was a “night clock” illuminated from within by a candle or oil lamp. Instead of ticking hands, it had a semicircular aperture that indicated the quarter hours. A digit representing the hours appeared within the aperture, moving across the arc as time passed. As the hour ended, this digit would disappear and the next would appear.

Clockmakers and watchmakers further refined this concept in the following years, introducing a more precise 180-degree minute scale and miniaturizing it into a pocket watch. Wandering hours fell out of favor and into the annals of odd horological inventions until a watchmaker at Audemars Piguet rediscovered the concept in a Swiss horological journal in 1989. The company spent 18 months developing its first wandering hours watch, the Star Wheel, which debuted in 1991.

Audemars Piguet took a then-radical approach to the watch’s design by revealing the mystery behind wandering hours. The watch showcased three transparent sapphire discs affixed to a wheel, displaying all the discs at once and not just a single digit for the current hour. The screws connecting the discs to the wheel were decorated with a star, probably suggesting the watch’s moniker. This design transformed a traditional and obsolete horological concept into a thoroughly modern avant-garde design.

The 41mm Code 11.59 by Audemars Piguet Starwheel pays homage to the original piece with  a similar movement architecture. but has a new geometric design focusing on round shapes and contrasting colors. The 18K white gold bezel and caseback are round; within the dial is a large, white gold circle containing the three hour discs. These domed aluminum discs are coated with black PVD and then sandblasted to achieve an opaline look. The dial is crafted from glittering blue aventurine reminiscent of a starry night sky, highlighting the “star” theme.

The black-and-white color scheme continues on the case. The case middle is crafted from black ceramic, as is the crown. Instead of being smooth and round, the case middle has an angled geometric design that Audemars Piguet highlights by contrasting polished bevels with satin finishing. The watch has a black rubber-coated strap finished with a new pin buckle; savvy collectors will notice it has the Audemars Piguet logo in place of the traditional monogram. The open caseback displays the movement, Calibre 4310, which is powered by a 22K pink gold skeletonized rotor. It has a 70-hour power reserve and is water resistant to 30 meters.

Why build this watch in the Code 11:59 collection and not as an iconic Royal Oak? “We tried,” admitted Bennahmias.  “But design-wise, it was ugly.”

What does Bennahmias like about a wandering hours complication? “The poetic side of it. Not to look at the time precisely by the minute or by the second. Just let it go,” he said. “When you look at it, you clearly see the hours. You clearly see the 10, 20, 30, and the minutes in between. But why bother?” He added that clients aren’t buying watches to look at the time, but to own something special that they will cherish, and that honors craftsmanship and tradition. Over 400 people work on the simplest timepieces, and his clients love the stories behind the watches.

(Adds quotes from CEO in third, tenth and thirteenth paragraphs.)