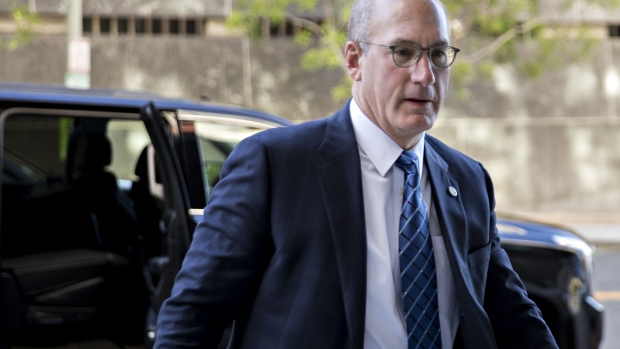 (Bloomberg) -- AT&T Inc. Chief Executive Officer John Stankey said his company is way ahead of T-Mobile US Inc. and Elon Musk in efforts to provide mobile phone service to remote areas via satellites.

They each have announced plans to offer wireless phone and internet connectivity to remote regions through a series of low-Earth orbit satellites still being launched.

T-Mobile and Musk, operating through his company SpaceX, announced with great fanfare in August a service they said would save lives by beaming signals to and from areas like remote mountain tops and seas where hikers or sailors may be stranded.

“I would say we probably have an 18 month lead on this,” Stankey said in an interview Wednesday. “SpaceX is going to have to go through the same process. And they’re not going to have their satellite up for testing until the middle of next year.”

Spokespeople for T-Mobile and SpaceX didn’t immediately respond to requests for comment.

AT&T has been working with AST SpaceMobile Inc., its satellite partner. The companies will need further approval from the Federal Communications Commission for satellites to serve as cell sites in space. The airwaves they plan to use are currently approved for land-based mobile communications and will need to be licensed for space as well.

“We are comfortable with our test data,” Stankey said. “The next step is to present our findings to the FCC, to support changing the license parameters.”

The initial uses for satellite communications will be for emergency services including connectivity for FirstNet, a government-run network. A consumer application would follow later, according to Stankey.

“It’s inevitable that satellite communications will be a supplement to mobile service,” he said.

(Corrects the licensing details for airwaves in seventh paragraph)