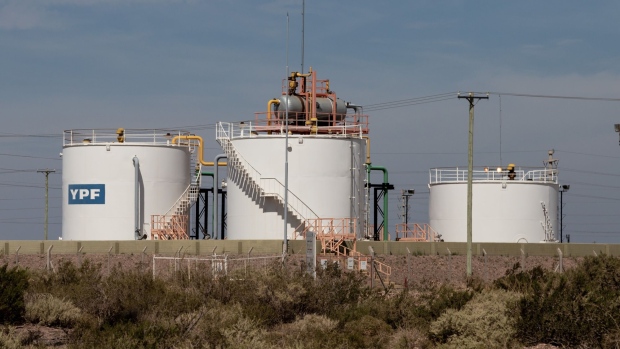 Storage tanks at the YPF SA Loma Campana facility in Anelo, Neuquen province, Argentina, on Tuesday, March 2, 2021. YPF, Argentina’s state-run oil company, needs to come up with more than $1 billion to spur drilling in Patagonia, where it’s leading development of the biggest shale patch outside the U.S. , Bloomberg

(Bloomberg) -- Argentina’s state-run oil company YPF probably will set next year’s spending plan at the lower end of a range that executives are discussing internally, according to a person familiar with the matter.

The driller and refiner previously said it’s planning to use its strong financial position to accelerate spending in the Vaca Muerta shale region that could pump 1 million barrels of crude a day by the end of the decade.

But expectations that investment would reach $5.5 billion are fading, in part because oil refiners in the country recently agreed to government demands to cap fuel-price hikes over the next four months to tame inflation.

That deal may augur more controls through 2023, something that YPF -- whose drilling activity depends heavily on revenue from gasoline and diesel sales -- has to factor into its outlook. A company spokesman declined to comment.

Capital spending will be closer to $5 billion in 2023, although discussions to finalize the plan are ongoing, the person said. That figure would still be the highest since 2015, according to Bloomberg data. YPF is forecast to invest $4.1 billion this year.