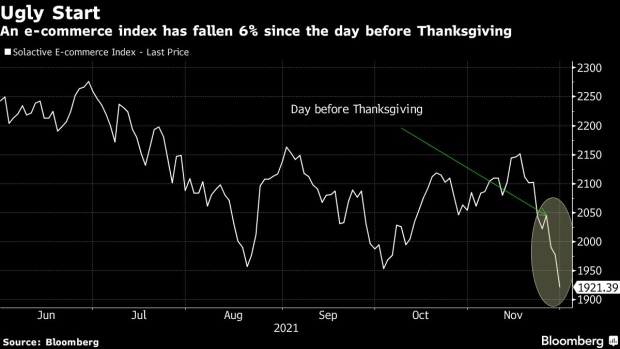 (Bloomberg) -- As technology stocks have slumped over the past week, traders have found a haven in the sector: Apple Inc.

The stock rallied Tuesday to close at a record high even as tech shares and the broader market sold off on worries about higher interest rates and the omicron coronavirus variant. The iPhone maker was one of only seven stocks in the S&P 500 to rise, and it’s adding to those gains Wednesday in premarket trading, up 1.6%.

Investors have often prized Apple for its consistent sales growth and hefty cash balance, and the stock now is getting an added boost from the hype around autonomous vehicles and its planned foray into metaverse-related products.

“Wall Street is viewing it as a safety blanket tech name during this market turbulence,” said Dan Ives, an analyst at Wedbush who sees the stock gaining another 12% in the next year.

Traders’ embrace of Apple is a turnabout from just a month ago, when the stock was underperforming the S&P 500 and the company warned that a shortage of semiconductors would hamper product sales for the holidays.

Morgan Stanley analysts have been talking up Apple’s electric car program after Bloomberg News reported this month that the company is accelerating the effort. Even if the firm wins just a 4% share of the global mobility market, its revenue base could double, according to the bank.

Similarly, mass-market adoption of either augmented reality or virtual reality -- a gateway to the metaverse -- will only occur “when Apple enters the race,” Morgan Stanley technology analysts Katy Huberty and Erik Woodring wrote in a report.

“It’s as safe as it gets in the tech space and yet there’s still fantastic opportunities in the coming years,” said Craig Erlam, senior market analyst at Oanda. “So there’s every reason for investors to feel safe with a stock like that, even in turbulent times.”

Since the report on foray into cars, Apple shares have risen almost 8%, and the stock is now outperforming the S&P 500 for the year.

And those worries about holiday sales may turn out to have been overdone. “Based on retail checks and supply chain it appears iPhone 13 demand is robust coming out of Black Friday,” Ives said.

While Apple has escaped those concerns, e-commerce companies such as Shopify Inc. and eBay Inc. are suffering backlashes. An index of web merchants has fallen 6% since the day before Thanksgiving, twice the decline in the S&P 500 over the same period. Among the biggest decliners are Wayfair Inc. with an 11% drop, eBay at 7.2% and Shopify at 6.6%.

Early data on sales trends over the Thanksgiving weekend have highlighted weaker-than-expected online spending as more shoppers chose to go out and buy from traditional brick-and-mortar retailers.

Among e-commerce companies, Amazon.com is best positioned for market share gains this holiday due to its relatively healthy supply chain and buy-now-pay-later option, analysts Justin Post and Michael McGovern wrote in a research note.

In-store purchases jumped in the U.S. by 43% on Black Friday, compared with e-commerce growth of 11%, according to data from Mastercard SpendingPulse, a reversal from last year when e-commerce sales soared. Spending on Cyber Monday shrank this year to $10.7 billion from $10.8 billion in 2020, missing projections, data from Adobe Inc. showed.

For Mark Stoeckle, chief executive officer and senior portfolio manager at Adams Funds, the results aren’t painting a full picture. Early promotions and concerns about adequate inventories probably pulled forward a lot of purchases, he said. Still, e-commerce sales are likely to face pressure from shoppers itching to get out.

“As convenient as shopping online was last year given where we were with the pandemic, it’s just not as much fun,” he said.

Tech Chart of the Day