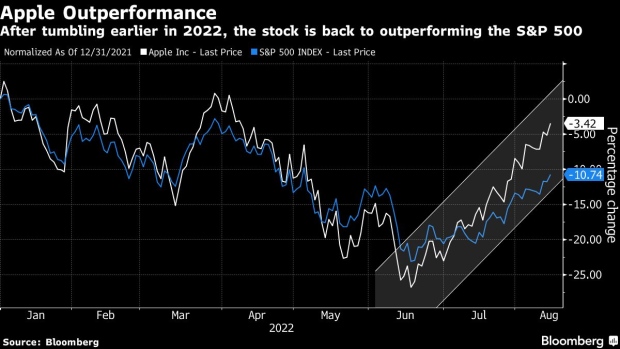 An employee places an Apple Inc. iPhone 13 Pro smartphone at one of the company's stores in Sydney, Australia, on Friday, March 18, 2022. The debut of Apple's latest iPhone brings a change to the way its U.S. customers can purchase the device, a move toward cutting wireless carriers out of the process and giving the tech giant more control. Photographer: Brent Lewin/Bloomberg , Bloomberg

(Bloomberg) -- For investors trying to decipher if the stock market rebound has staying power, Apple Inc. holds a clue.

The world’s most valuable company has the biggest influence in the S&P 500 Index and its participation in the market-capitalization weighted benchmark is essential to any sustainable rally. Apple shares beat the S&P for a ninth-consecutive week and have helped fuel a 22% rebound in the tech-heavy Nasdaq 100 from a June low.

Apple is a so-called tent-pole stock that dominates investor attention and can help define investment narratives, according to Nicholas Colas, co-founder of research firm DataTrek. In that respect, he said, Apple’s recent performance is “quite heartening.”

The S&P 500 is still down 10% in 2022 despite rallying since June. Apple’s shares, on the other hand, are on the cusp of turning positive for the year after tumbling with other technology stocks in the first half. Its shares have outperformed in both of the bull markets since the 2008 financial crisis.

In snapping up Apple shares, investors are betting that the iPhone maker’s strong balance sheet will allow it to continue returning cash to shareholders and wring big profits out of its more than 1 billion users despite the potential for a recession in the US with the Federal Reserve bent on fighting soaring inflation.

“Apple is a safe haven that people flock to when uncertainty abounds in the rest of the market,” said Daniel Morgan, senior portfolio manager at Synovus Trust. “Apple shares are driving the rally in the S&P 500 based on the durability of its model.”

Like the broader market, risks to Apple’s ascent abound. Inflation is weighing on consumers while China’s stringent Covid-19 policies pose a lingering threat to its supply chains. While Apple has reportedly asked suppliers to maintain last year’s pace of iPhone production, some of Apple’s suppliers are sounding alarms over a pullback in demand.

Micron Technology Inc. this week warned that sales in the current quarter are expected to be weaker than it expected when the maker of memory chips gave its forecast less than six weeks ago. That followed disappointing revenue projections from Qualcomm Inc., Intel Corp. and Nvidia Corp.

The sobering news from chipmakers, however, didn’t stop technology stocks from rallying this week after a US consumer price gauge came in lower-than-expected, a result widely interpreted as easing pressure on the Federal Reserve to continue aggressively hiking interest rates to tame inflation. The Nasdaq 100 advanced 2.7% with more interest rate sensitive stocks like cybersecurity company Zscaler Inc. jumping more than 10%.

For Apple, the rising stock price has put the shares back in expensive territory. It’s now priced at 27 times profits projected over the next 12 months, compared with an average of 17 over the past decade. That’s making investors like David Bahnsen, chief investment officer at the Bahnsen Group, wary of buying the stock at current levels.

“Apple is probably the safest of the FAANG plays, but it isn’t an attractive entry point,” he said, referring to the cohort of mega-cap technology companies.