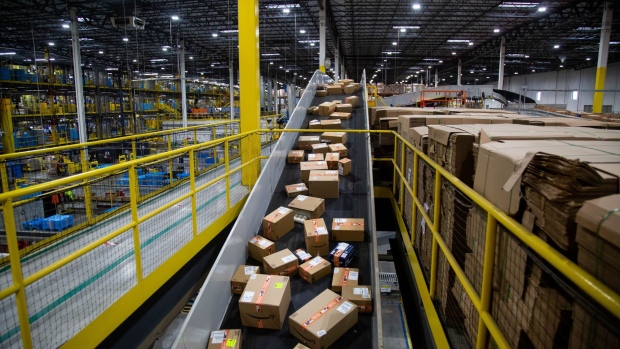 Packages move along a conveyor at an Amazon fulfillment center on Cyber Monday in Robbinsville, New Jersey, U.S., on Monday, Nov. 29, 2021. Adobe Digital Economy Index is expecting Cyber Monday to bring the biggest holiday shopping of the year, with consumers projected to spend between $10.2 billion and $11.3 billion. , Bloomberg

(Bloomberg) -- Amazon.com Inc. will hold a second Prime Day sale on Oct. 11 and Oct. 12 to boost sales among cost-conscious consumers who are expected to start their holiday shopping even earlier this year. This marks the first time the e-commerce giant has hosted the event twice in the same year.

Retailers are bracing for a lackluster holiday that will require deep discounts to move a glut of inventory. Many consumers, meanwhile, are planning to cut back because higher food and fuel costs have left them with less to spend.

More than one-third of consumers said they would begin their holiday shopping in October or earlier, according to a survey by Bankrate.com.

Amazon’s “Prime Early Access Sale” will feature exclusive offers to Prime members in 15 countries. The Seattle-based company launched Prime Day in 2015 to attract new subscribers who now pay $139 a year for shipping discounts, video streaming and other perks. The event helps Amazon lock in shoppers before the holidays and deepen its relationship with existing customers by offering them deals on Amazon gadgets and other goods.

This year US online sales will rise just 9.4% to $1 trillion, the first time growth has slipped into the single digits, according to Insider Intelligence, which in June lowered an earlier annual forecast. Spending on Amazon will hit $400 billion, up 9% and slower than the overall industry, the research firm says.

Amazon held a two-day Prime Day promotion in July that boosted online spending in the US by 8.5% to $11.9 billion, according to Adobe Inc. Amazon said it sold more than 300 million items over the two days, more than any previous Prime Day.