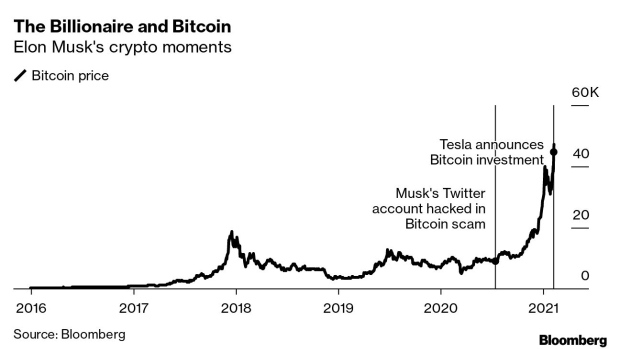 (Bloomberg) -- Bitcoin surged to a record on Tuesday above $48,000 after Tesla Inc. announced a $1.5 billion investment. That capped Elon Musk’s years-long flirtation with cryptocurrencies, which has mostly played out in Twitter memes -- some of them market-moving.

Tesla’s decision to accept Bitcoin as payment for its electric cars may help bring the virtual currency into the mainstream of global finance.

Yet its famed volatility has led to warnings from regulators that investors could be wiped out.

Here are some choice moments in the Tesla chief executive officer’s enthusiasm for all things crypto.

For many observers it started when a blog post shared on digital-currency sites suggests Musk is Satoshi Nakamoto, the mysterious cryptocurrency founder. The billionaire rejects the claim and says he forgot where he put his Bitcoin.

Musk’s Twitter page is among a handful of accounts that were apparently hacked to promote a crypto scam. Investors were duped into giving away at least $120,000 worth of Bitcoin, said to be spirited away into other accounts by the hackers. A 17-year-old Florida high school graduate and two others were charged by U.S. authorities in relation to the alleged hack.

The billionaire tweets that month, “Excuse me, I only sell Doge!” That’s seen as a reference to Dogecoin, a cryptocurrency started as a joke in 2013 that features a Shiba Inu dog as a mascot.

Musk asks about converting “large transactions” of Tesla’s balance sheet into Bitcoin during a Twitter conversation with Michael Saylor, CEO of MicroStrategy Inc. “Are such large transactions even possible?” Musk tweeted at the time.

Dogecoin becomes a retail-trader obsession thanks in part to a Musk tweet showing a “Dogue” magazine cover. Though no explanation was given, many users take that as another reference to Dogecoin.

Musk adds “#bitcoin” to his Twitter profile page, without an explanation. Within minutes, Bitcoin jumps as much as 15%, surging above $38,000, amid speculation that he might be a Bitcoin investor.

Speaking on the social audio app Clubhouse, Musk declares he’s a Bitcoin supporter. “Bitcoin is a good thing,” he said, adding that he was “late to the party” and should have bought the cryptocurrency eight years ago.

Musk breaks his self-imposed Twitter hiatus and sends a series of tweets about Dogecoin. “No highs, no lows, only Doge,” he posted.

Dogecoin briefly touches a record after Musk as well as fellow celebrities Snoop Dogg and Gene Simmons tweet about it.

Tesla announces a $1.5 billion investment in Bitcoin and a plan to accept digital currency as payment for electric cars. Bitcoin’s price gains more than 20% from its level before the announcement.

Dogecoin’s market value now sits at about $10 billion, making it the 10th biggest among cryptocurrencies, according to CoinMarketCap.