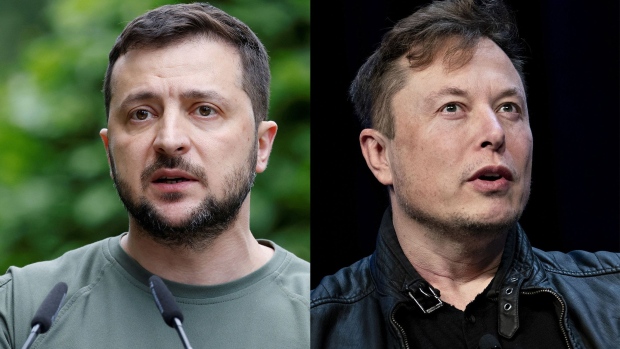 (Bloomberg) -- Ukrainian President Volodymyr Zelenskiy invited Elon Musk to visit his war-ravaged nation and see for himself the damage wrought by Russia, after the world’s richest man floated the idea of a peace deal that would give major concessions to President Vladimir Putin.

Musk played a key role restoring Internet service in Ukraine after the invasion, Zelenskiy told the New York Times Dealbook conference Wednesday, saying “life was maintained” thanks to the deployment of his Starlink satellite communications system.

But sometime later, “it seems that Elon began to change his opinion and we began to hear all kinds of appeals,” Zelenskiy said.

“I always say very openly if you want to understand what Russia has done here, come to Ukraine and you will see this with your own eyes without any extra words,” Zelenskiy told the conference. “And after that, you will tell us how to end this war, who started it and when we can end it.”

Zelenskiy was responding to a question about a tweet Musk wrote in October laying out a peace proposal that would require that Ukraine remain neutral, give Crimea to Russia and redo elections in areas of Ukraine taken over by Russia.

“This is highly likely to be the outcome in the end – just a question of how many die before then,” Musk wrote. “Also worth noting that a possible, albeit unlikely, outcome from this conflict is nuclear war.”

Zelenskiy said he doesn’t know if somebody’s influencing the billionaire or if “he’s making those choices himself.”

At one point, Musk also said his company SpaceX wouldn’t continue to foot the bill for portable Starlink terminals that are providing internet communications for both Ukrainian citizens and its military, only to reverse that position.

Zelenskiy also said he has spoken to Benjamin Netanyahu since the recent election in Israel and that he impressed upon the former prime minister, who’s expected to return to power, that Ukraine needs air defense systems to protect against drone attacks. So far, Israel has resisted providing weapons to Ukraine, contributing equipment and humanitarian aid instead.

Zelenskiy said that more than 550 Iranian drones have been used in attacks against his country and said that Netanyahu must choose between his relationship with Putin and his country’s historical ties to Ukraine.

“He certainly can help us with air defense systems,” Zelenskiy said. “If he just wants to maintain his personal relations with President Putin, then of course he may continue to do what he’s been doing. But if he wants to maintain an historical relationship between Israel and the Ukrainian people then I think you have to do everything you can in order to save as many people as possible.”

Zelenskiy said he didn’t think Russia would use nuclear weapons in Ukraine, arguing it would be more dangerous to leave the Russian president with the feeling that he could take another country’s territory without facing consequences.

“We should not be afraid” of the nuclear threat, Zelenskiy said. “We need to put him back in his place.”