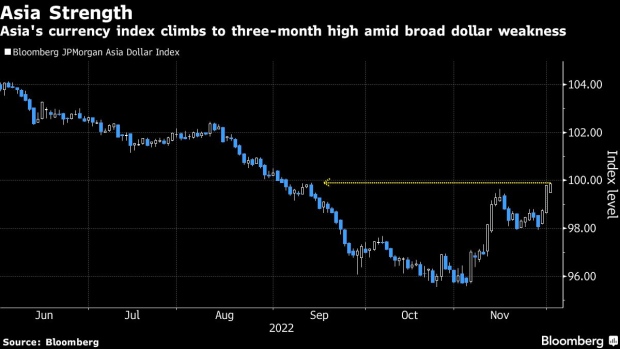 Japanese yen coins and banknotes on a tray arranged at a branch of Resona Bank Ltd. in Tokyo, Japan, on Tuesday, Aug. 9, 2022. Dollar-yen, which soared 38% from a March 2020 trough to mid-July this year, is in retreat. Photographer: Kiyoshi Ota/Bloomberg , Bloomberg

(Bloomberg) -- Japan’s yen and Korea’s won spearheaded a surge in Asian currencies Thursday, as prospects for a slower pace of Federal Reserve rate hikes triggered broad weakness in the dollar.

The yen strengthened 1.1% to around 136.50 per dollar. The risk-sensitive won rose 1.5%, strengthening past the 1,300 level for the first time since August. The Bloomberg JPMorgan Asia Dollar Index climbed to a three-month high.

Traders were reacting to comments from Fed Chair Jerome Powell that cemented expectations the central bank will step down from its aggressive pace of tightening in December, remarks that sent US bond yields tumbling and stocks soaring Wednesday.

“The dollar is losing more altitude as the market embraces a less hawkish than feared message from the Chair,” said Rodrigo Catril, strategist at National Australia Bank Ltd. in Sydney. The “big decline in 10-year Treasury yields sees the yen at the top of the leader board.”

The dollar has weakened against most global peers in recent weeks as traders pull back their expectations for peak interest rates in the US and position for an economic slowdown there. At the same time, optimism that China is inching away from its strict Covid-Zero policy has supercharged the move in Asian currencies.

Every Asian currency except the Indonesian rupiah posted gains against the greenback over the past month. The yen -- the worst-performing Group-of-10 currency this year thanks to the Bank of Japan maintaining an ultra-loose monetary policy -- posted its best monthly gain since 2008 in November, as fears of a hawkish Fed ebbed.

Still, it could “take a bit more time to set off a prolonged dollar decline,” said Aninda Mitra, a macro and investment strategist at BNY Mellon Investment Management in Singapore. “While the prospect of a US rate peak seems to be coming into view as is a China reopening -- both of which are dollar headwinds -- neither outcome is by any means assured just yet.”

(Updates prices. A previous version of this story corrected the scope of the yen’s move in November.)