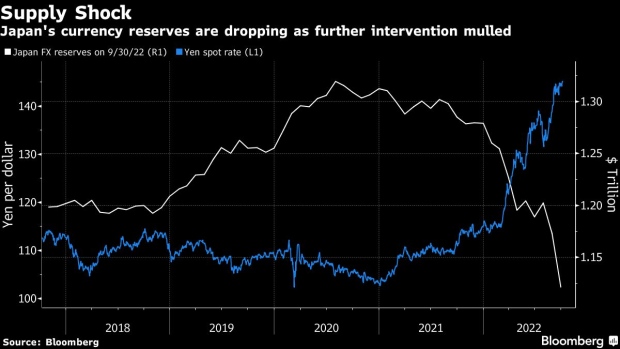 Bundles of Japanese 1,000 yen banknotes on a tray at a branch of Resona Bank Ltd. in Tokyo, Japan, on Tuesday, Aug. 9, 2022. Dollar-yen, which soared 38% from a March 2020 trough to mid-July this year, is in retreat. Photographer: Kiyoshi Ota/Bloomberg , Bloomberg

(Bloomberg) -- The yen is once more weakening toward levels that triggered direct market intervention last month, as traders test authorities’ tolerance for a depreciating currency.

The Japanese currency reached 145.14 per dollar in Tokyo trading Friday and was set for an eighth straight week of declines. It hit 145.90 per dollar on Sept. 22, triggering intervention from Japan that led to a near-4% intraday rally in the yen.

The effect of that intervention has almost vanished as the Bank of Japan continues with its accommodative monetary policy stance while peers like the Federal Reserve hike and ramp up hawkish rhetoric. An extended period of yen weakness beyond 145 could fan speculation that the ministry will tolerate a gradual decline in the currency especially as Japan’s foreign-exchange reserves have fallen.

“While it appears that the MOF wants to avoid a sustained break through 145 for now, the significance of this level will diminish fairly quickly,” Adam Cole, chief currency strategist at RBC Europe in London, wrote in a research note. The RBC intervention model is “consistent with anecdotal evidence that the MOF is more sensitive to the rate of change than the level of the exchange rate.”

Yen traders were preparing for further volatility Friday, which sees a key catalyst for financial market direction with the much-anticipated release of US labor market data for September. Further raising the chances of outsized price swings is the fact that Monday is a holiday in both the US and Japan, which will likely impact liquidity.

“The yen could test upper half of 145 levels if the US jobs data cement speculation of a 75 basis point Fed rate hike,” said Daisaku Ueno, chief currency strategist at Mitsubishi UFJ Morgan Stanley Securities Co. in Tokyo. “No matter how much the finance ministry spends, an intervention can not stop yen weakness totally but can only cause a temporary shock yen rally.”

Japan’s foreign-exchange reserves fell to $1.24 trillion at the end of September from $1.29 trillion a month earlier with holdings of foreign securities down by $55 billion, according to the Ministry of Finance.

“The fall in Japan’s foreign reserves in September was the largest on record,” Finance Minister Shunichi Suzuki told reporters in Tokyo. “Reasons behind the decline include a decrease in securities value as yields rose, as well as Japan’s selling of foreign currencies for intervention.”

Suzuki reiterated on Oct. 3 that the nation will take action against excessive one-sided moves in the foreign-exchange market if necessary. The Ministry of Finance said last week that it spent 2.84 trillion yen ($19.6 billion) in September to limit the yen’s losses.