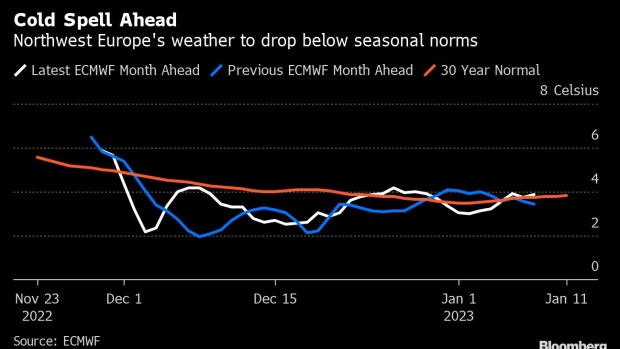 Heating network pipes in a clearing in Belchatow, Poland, on Thursday, Nov. 24, 20212. Poland's use of coal makes it an outlier among the 27-member European Union, the country of 38 million people accounts for 77% of all the households in the bloc that still use coal for heating. Photographer: Damian Lemański/Bloomberg , Bloomberg

(Bloomberg) -- Temperatures across Europe likely will plummet this month after a relatively mild November, and the heightened pressure on natural-gas supplies will test the region’s fragile energy networks.

Long-range outlooks from Maxar Technologies Inc. and Marex point toward a higher probability of cooler-than-average conditions over most of the continent. Cold air will be blowing from the Arctic for at least the first part of the month because of a weather pattern known as blocking.

“The cold start to December would yield increased demand in central and northern Europe, with the potential for this continuing into the latter half of the month if Arctic blocking remains strong,” said Matthew Dross, a Maxar meteorologist. “The main question we now face is how long this cold blocking feature will last.”

A milder-than-normal autumn allowed utilities to refill their gas tanks, and the first prolonged cold spell will stress that storage. Benchmark European gas contracts are four times higher than normal for this time of year, leaving industry and households facing soaring costs.

But it’s not only Europe that needs to bundle up. Temperatures in Mongolia sank to -47C, according to the nation’s weather bureau.

The cooler conditions expected in Europe are due to an asymmetric, weaker polar vortex and an ongoing split of the vortex at lower levels, Marex meteorologist Alexandre Fierro said. That will boost power demand for heating.

Olivia Birch, a meteorologist at Weather Co., said northern Europe will be cold, but she sees a “warmer, wetter and windier forecast from Iberia, through the Mediterranean, Alpine region” and toward southeastern areas.

Autumn in Europe has been unseasonably warm, helping keep gas in storage facilities, which are now about 94% full across the continent. Germany’s sites are almost 99% full.

German national forecaster Deutscher Wetterdienst said the country may face a cold spell after it experienced the third-warmest autumn since monitoring began, a pattern around the continent that sparked concerns about climate change.

In the UK, a colder-than-normal winter is expected, with temperatures below seasonal norms, although heavy rain and strong winds are less likely than in a typical December, Britain’s Met Office said. There could even be snow, with thermometers falling 1C to 3C (1.8F to 5.4F) lower than usual, said Tyler Roys, a senior meteorologist for AccuWeather Inc.

“The cold is getting nearer,” Jonathan Westby, senior vice president for LNG at buyer and trader Jera Global Markets, said at the World LNG Summit in Athens. “People are starting to constantly worry about what is actually going to happen.”